In tonight's episode of Kahat Hanuman Jai Shri Ram, Garud challenges Maruti to defeat him in a race in order to free his friends. Read more! 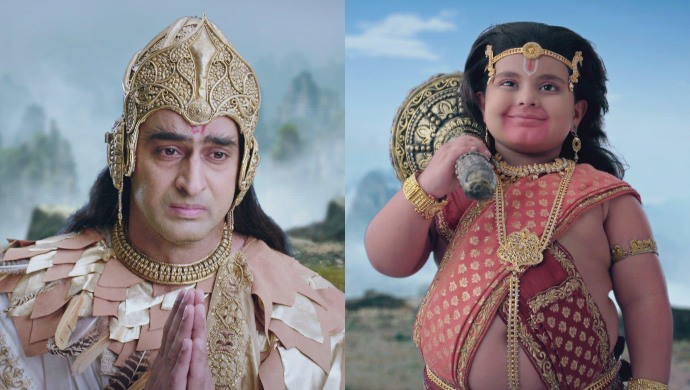 In tonight’s episode of Kahat Hanuman Jai Shri Ram, Maruti reaches the tree to which his friends are tied up. Pakshiraj Garud also follows him and transforms himself from eagle to man. Maruti requests him to free his friends but Garud, in turn, puts forth a condition. He challenges Maruti to race him in flight. Whoever takes 21 rounds of the Earth and finishes first will win! But if Maruti loses the competition, his friends will be held captive for the rest of their lives.

Maruti accepts the challenge and announces that Garud will be flying to feed his own ego whereas Maruti will be flying for his friends. Maruti takes off. Garud mocks Maruti’s friends before taking the eagle form and flying away. Narad Muni thinks Mahadev and Parvati should know about this. When he goes to talk to them, Mahadev tells him that he knows Maruti will win because has been trained by Vayu Dev, the god of wind.

Then, a significant messenger of the vaanar sena prays to Mahadev to help Maruti as he is only a child, whereas Garudraj is the king of birds. Maruti and Garud fly neck to neck. Garud uses his advantage and accelerates rapidly to defeat Maruti. Maruti remembers his mother Anjani’s words of wisdom and Vayu Dev’s training. He closes his eyes and shouts “Jai Shri Ram!”

Maruti flies at full speed and leaves Garud far behind, finishing 21 rounds of the Earth first! Just then, Mahadev’s reflection rises above Maruti. Garud can’t believe his eyes. When Mahadev reveals that Maruti is Vayu Dev’s student, Garud accepts his defeat and apologises to Maruti for humiliating him. Later, Maruti goes back to the tree and rescues Chagan, Magan, and Bandhu. The four of them hug and celebrate!

The Casino Teaser Will Take Your Breath Away With It’s Glitz, Glamour And…

In the upcoming episode, Maruti reaches a dark land which is forbidden for vaanars. A witch, Chhaya Shikari, sees him and says that she can trap anyone’s shadow and enslave them. She promises to herself that till the next morning, every resident of Sumeru will be under her captivity! How will Maruti save his people?