Anjani punishes Maruti because of his irresponsible behavior. To find a solution to convince his mother Maruti prays his aradhya. Details below 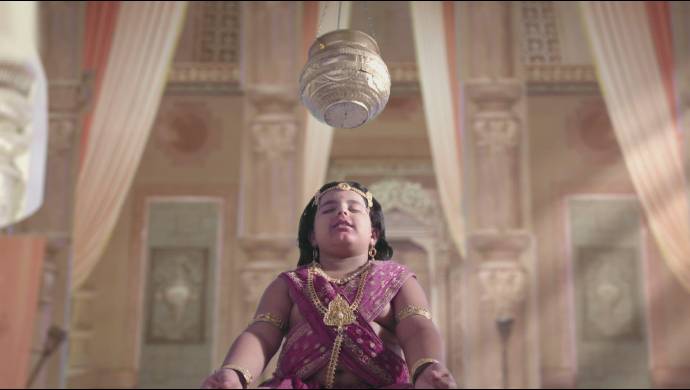 In tonight’s episode of Kahat Hanuman Jai Shri Ram, we see Maruti returning home after discovering his aradhya’s name. Anjani hugs him tightly at first but later decides to punish him, for his irresponsible behavior. She locks Maruti outside the palace. He hard to convince his mother to forgive him but she is furious with him and listens to none of his explanations. Maruti somehow manages to tell his mother, about how much he missed her and that he wants to sleep on her lap and listen to her lullaby. He also wants to eat his favorite laddoos which are made by her. But his mother is quite upset and she denies to listen to Maruti.

Later, he struggles to find a solution that will help her calm down. He then decides to pray to his aradhya i.e Ram. Soon his prayers are heard by Kamdhenu Mata. She blesses Maruti, and as a result, all the cows who were standing in the stable start secreting milk. In no time, there is a river of milk flowing through the entire village. Everyone in the village is amazed to see this scenario. Anjani is equally shocked.

They rush to check for Maruti and try to open the door but they fail. Anjani gets panicked and calls out to her son . Listening to his mother’s call, Maruti stops his meditation and rushes to her. By now, Mahadev has already taken care of the milk by carrying out abhishek for Maruti, as bathing with milk is considered to be a holy ritual. Finally, the door opens and the mother unites with her beloved son, by hugging him tightly. Maruti apologises to his mother and she happily forgives him.

In the upcoming episode of Kahat Hanuman Jai Shri Ram, we will see Maruti and his friends coming across birds, caught inside a net. His friends tell Maruti to free the birds. He decides to again pray to his aradhya. Looking at Maruti’s superpowers, some evil bodies get attracted to him and they try to trick him.

Will Maruti face another problem? How will he fight evil powers? Find out on Kahat Hanuman Jai Shri Ram. For more fun and entertainment, watch your favorite shows on ZEE5