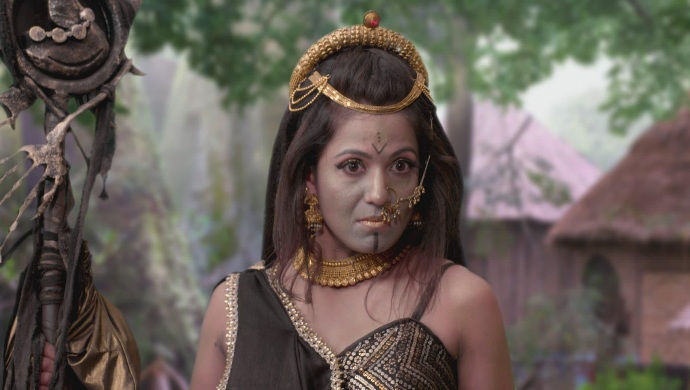 In tonight’s episode of Kahat Hanuman Jai Shri Ram, Maruti flies over Chhaya Shikari Singhika’s dark land, who wants to capture his shadow and make him a slave. But Maruti increases his speed, thinking that his friends might be waiting for him, and gets out of Singhika’s reach. Singhika sees that Maruti is crossing the border and becomes restless.

Then, Mahadev reveals to Parvati and two other men that Singhika is from the lineage of Rakshas Raahu and Hiranyakashyap. He tells the story of how Prahlad was sent as a son for holika dahan and that Shri Hari Vishnu had killed the asura. Singhika reaches Sumeru to avenge Maruti and reaches Bali’s palace.

When Bali gets angry, Singhika shows herself and inquires who is the vaanar child that broke the peace treaty between her and Sumeru. Revealing Maruti’s name to her, Bali says that as the vaanar-raj he allows Singhika to trap shadows of the people of Sumeru because he hates Maruti. Bali says, “My enemy’s enemy is my friend.”

When Maruti goes home after playing hide-and-seek with his friends, he looks at and admires his parents Anjani and Kesari, who are having a cute, small fight, for their love. Meanwhile, Singhika is creating havoc in Sumeru, enslaving the villagers by trapping their shadows into her golden-black bag.

In the upcoming episode, Maruti goes back to play hide-and-seek with his friends. When they try to find him, Maruti hides behind a tree to trouble them a little more. Singhika watches this from above and abducts Chagan, Magan, and Bandhu by trapping their shadows in her bag. When Maruti jumps out to peek-a-boo, he sees his friends have disappeared. How will Maruti find them?