Three rakshasas are threatening to disturb the peace in the town of Sameru. Details inside. 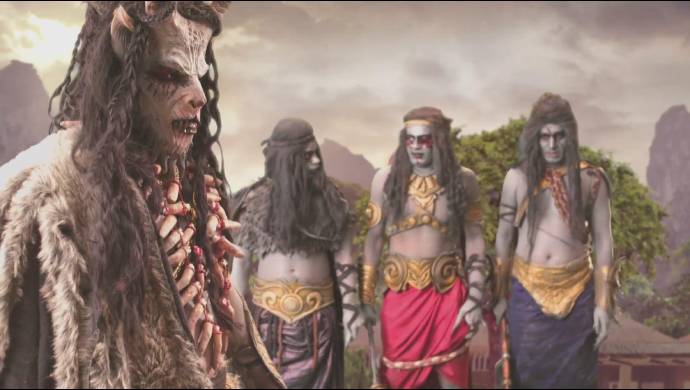 In tonight’s episode of Kahat Hanuman Jai Shri Ram, we see Maruti trying to explain to his friends that he has gotten to know his aradhya’s name. Maruti further convinces them by saying that the name of his aradhya is enough for him, for attaining enlightenment. Soon they hear some birds chirping. When Maruti and his friends start walking in the direction where the birds can be seen flying, they find that the creatures are stuck in a net and are helpless. Maruti tells the birds to keep calm and pray to Lord Ram. And to everyone’s amazement, the birds are set free in an instant.

The village is about to get attacked by some evil forces.  They intend to attack humans and cut off their fingers, to make a necklace for their king Raktasur. The birds that are set free, go chirping around these monsters. They chirp so loudly that the monsters start losing their hearing. The three of them named Dhrushtasur, Kaptasur, and Pushtasur decide to attack the town Sameru, where Maruti resides.

Maruti is present in the jungle to grab some fruits, not knowing about the dangerous rakshasas roaming around. The rakshasas spot Maruti and his friends and decide to kill them. They change their avatar, transform into Rishis and go in front of Maruti. Delighted to see the Rishis, Maruti invites them to his palace to grace Lord Shiva’s pooja.

Shah Rukh Khan And Salman Khan To Have A Great 2020? Astrologer Anupam Jolly…

In the upcoming episode of Kahat Hanuman Jai Shri Ram, we will see Maruti taking the rakshasas who have turned themselves into Rishis, into the palace. After entering the palace, the rishis inform Anjani that as per their predictions, nothing in this palace is divine and there is a threat to their lives.

Will the rakshasas manage to accomplish their mission of disturbing the peace in the town of Sameru? Find out only on Kahat Hanuman Jai Shri Ram streaming on ZEE5