Maruti decides to fight off Singhika but is protected by Angad and Anjani in their palace. Singhika's sons goad him into a fight with her at their den 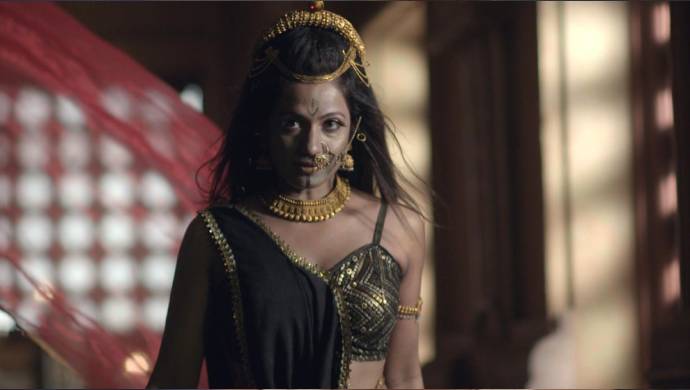 In the previous episode of the show, we saw how Maruti touched upon Singhika’s ego, which made her follow him till Sumeru. Singhika was permitted to enter the land by Sumeru’s king Bali. Bali hates Maruti and decided to form an alliance with Singhika as he thought that the latter would kill Maruti and make things easier for him.

In the previous episode, we saw Singhika trying to capture Maruti’s shadow and she fails to do so as Maruti is quick in flying away. This annoys Singhika and she decides to follow him. While Mahadev tells his devotee Nandi that Singhika is quite dangerous as she is the mother of Raahu, the Rakshasa who drank the nectar of immortality. He also adds that Singhika belongs to a very dangerous Rakshasa clan. She is the sister of Hiranakya and Hiranyakashapu who had to be killed by Lord Vishnu when he had appeared twice on earth in different avatars.

Today, Singhika and Maruti have a face-off. The latter’s friends are captured by Singhika and he tries to free them from the demoness. Maruti fights with Singhika, who uses her superpowers against him. Maruti is saved by Angad’s men and Anjali holds him safe in her arms. Meanwhile, Angad and Anjali get the royal saint to produce a raksha kavach for their home in the form of ashes. Singhika cannot enter the premises of their palace.

Then Singhika comes in the form of an old lady and tries to invade their palace. In the next episode, we will see how Maruti searches for his friends and reaches Singhika’s den in the quest to get them home. Singhika’s sons demean his powers and instigate him to fight Singhika.

What do you think would happen next? Stay tuned to find out!

Meanwhile, Stream all episodes of the show here!