Rakshasas fool Maruti and enter his palace to kill people and chop off their fingers. Find out the detail inside. 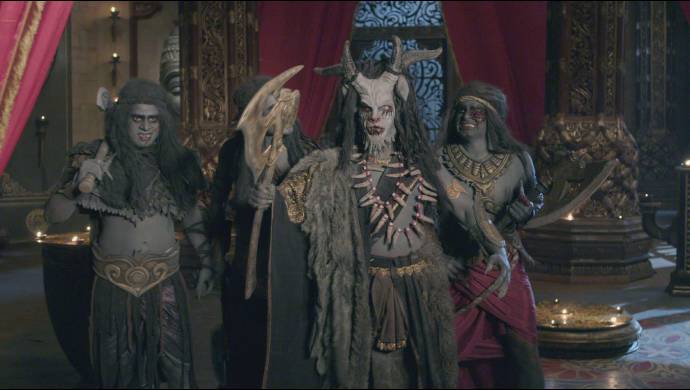 In tonight’s episode of Kaha Hanuman Jai Shri Ram, we see that Maruti has invited the rakshasas, which he thinks are the rishis for Mahadev’s puja. Maruti then introduces his parents to the rishis. When Anjani thanks the rishis for attending the puja, the rishis claim that a big accident is about to occur in the palace. This shocks everyone. The rishis also tell the family members that there is no purity in the atmosphere and Mahadev would never be impressed with such an environment. They warn everyone saying that the kids of the family are in danger.

Maruti then takes the rishis to show them their quarters and on their way, he asks them about how can he get closer to his aradhya. The rishis reply saying that he has to wake up at midnight and carry out a puja. The rishis further tell Maruti about the process of carrying out the puja and also inform him that he should keep this a secret.

At night, Anjani is worried about Maruti and starts sobbing. On the other hand, the latter is very excited knowing that the rishis are going to help him meet his aradhya. At the stroke of midnight, Maruti leaves his room to conduct the puja. The rakshasas are eagerly waiting for this moment. They split themselves across different quarters of the palace to attack the people and chop off their fingers so that they can make a necklace for their king Raktasur. Meanwhile, Maruti is busy praying to Mahadev and carrying out the puja.

In the upcoming episode of Kahat Hanuman Jai Shri Ram, we will see the rakshasas deciding to kill the people who are sleeping. Raktasura enters Maruti’s parents’ bedroom to carry out the murderous act. Maruti, who is busy praying to Mahadev, picks up the bell and rings it. This shocks the rakshasas, as they fear that everyone in the palace will get alerted.

Will Maruti save his parents from dangerous rakshasas? Find out on Kahat Hanuman Jai Shri Ram streaming on ZEE5