In tonight's episode, Indra asks his son Raja Baali to kill Hanuman, after his first attempt is foiled by Lord Shiva himself. 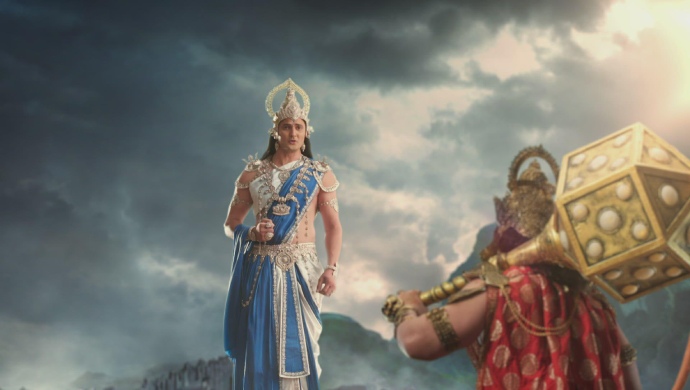 In the previous episode of Kahat Hanuman Jai Shri Ram, Kesari and Anjani are overjoyed to be blessed with a kid from Lord Shiva himself. The baby Hanuman, kicks inside the stomach but the effects are felt across nature. Lord Indra falls off his throne and thinks it is an earthquake. Valmiki tells him about Kesari and Anjani being blessed by a kid from Lord Shiva himself. Indra feels that the new kid is trying to take his throne. A pregnant Anjani goes with Kesari to her ancestral mountain. When they are inside the cave, Indra blocks all the exits with rocks and then tries to drown them by pouring heavy rain.

Kesari and Anjani are gasping for breath. Parvati asks Lord Shiva to stop Indra but he says that it is all part of the larger plan. Kesari holds Anjani up to let her live and she prays to Lord Shiva for help. Hearing her prayers, Lord Shiva forms a mace which will later become Hanuman’s future weapon. Lord Shiva hits the mountain with the mace and the water leaks out from the big hole in it.

Indra realises that he is fighting with a much stronger force than he expected. Kesari and Anjani walk out safe and dry. They go back to the palace and begin preparing for the godh-bharaai (baby shower) ceremony. Among their guests is Jambavan, the king of bears, who has existed since the beginning of time. Shiva is impressed that even after being so mighty, Jambavan, is still happy to help Kesari and Anjani.

Anjani tells her friends how Lord Shiva helped her get a child. She makes a promise to raise her child as a Shiv bhakt. Indra goes to meet Raja Baali, who guards the border protecting the Vanars from the Rakshas. Indra warns Baali that there is a danger rising in the palace itself. Lord Shiva tells Parvati that Baali is actually Indra’s son and the best person to kill Hanuman.

Indra tells Baali that Anjani has been blessed with a baby from Lord Shiva himself. Indra says that the unborn kid is powerful enough to defeat Baali and challenge his throne in the future. Baali decides to end the baby in Anjani’s womb to protect his throne as King of the Vanarlok.

In the next episode, Raja Baali finds a poison which will kill Hanuman inside the womb. He takes the poison and goes to Anjani’s godh-bharai celebration. How will Hanuman survive this attack? Find out tomorrow. Watch the latest episodes of Kahat Hanuman Jai Shri Ram, streaming before TV on ZEE5.