In tonight's episode, Singhika enters Maruti's palace and enslaves Anjani and Kesari. Maruti sets out to save them but gets captured himself! 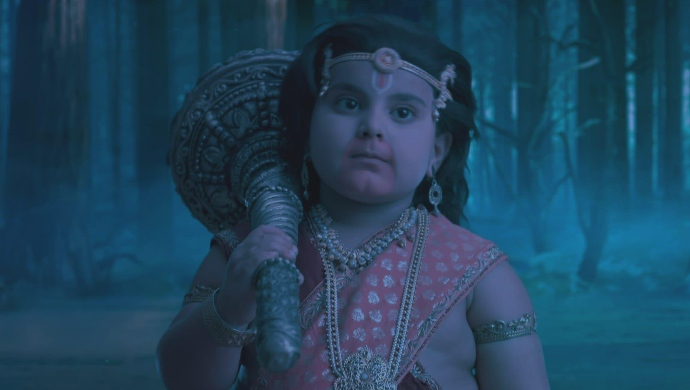 In tonight’s episode of Kahat Hanuman Jai Shri Ram, Anjani is unconscious and Maruti goes to the vaidya to get some medicines for her. The vaidya tells him to ensure that Anjani’s mood is always good and that she is not stressed about anything. Meanwhile, Chhaya Shikari Singhika has entered Maruti’s palace and smells that the flying vaanar is somewhere nearby. Maruti enters with some medicines and flowers.

Then, Singhika traps the shadows of three servants in the palace and puts them in her bag. Anjani regains consciousness and gets out of her bed. She screams loudly when Singhika appears before her. Anjani searches for Kesari, but Singhika reveals that she has already enslaved him. By the time Maruti hears Anjani, Singhika has already trapped her in her bag. Maruti is shocked to see his mother disappear into thin air.

Maruti reaches the entrance of Singhika’s queendom in search of Anjani. When he tries to step in, he is struck by an electric current. He finds a woman’s dress and jewellery and suspects that they are his mother’s. With full force, Maruti tries the break the front wall with his gada. A voice from behind stops Maruti and he turns around to see two rakshasas. Maruti immediately beats them up with his gada.

Singhika appears in her land and traps Maruti in her bag. Mahadev and Parvati look down from swarga lok and wonder if Maruti will crack Singhika’s magic and save the people of Sumeru in time. In Singhika’s captivity, when Maruti opens his eyes, he finds himself in a huge iron cage. He cries out “Jai Shri Ram” and with one hit by his gada, he breaks the door open.

Mentalhood’s Karisma Kapoor On Her Struggles As An Actor: I Had To Prove…

In the upcoming episode, Maruti faces Singhika and declares that she did wrong by enslaving the people of Sumeru. He challenges her that he will rescue each and every one of them. He also announces that she will never be able to put her evil eye on them. Furious at his words, Singhika lifts her wand and puts a spell on Maruti. Will Maruti save himself?