"Manish had made a hideous lehenga, it looked like kambal, a razai (blanket), says Karan on ZEE5 show Not Just Supper Stars. 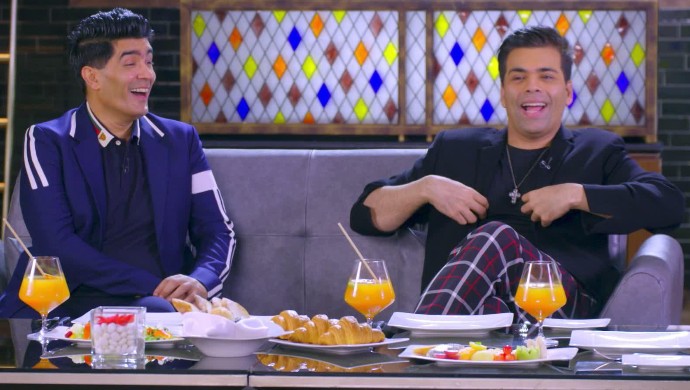 “Manish Malhotra doesn’t have punctuality in his DNA,” complains Karan Johar for being ‘fashionably late’ on Not Just Supper Stars. The two close friends and superstars made an appearance on the ZEE5 show recently. During their visit on the chat show, Karan and Manish recalled how they became friends, being chalk and cheese and more. “Manish and I go back 26 years. We first met on the sets of my father’s film Gumrah. We bonded over Hindi cinema,” reveals KJo.

“I have a special place in Karan’s life. I am one of the very few close friends who fights with him,” adds Manish as Karan cuts in, “I am very non-confrontational, and Manish can say, with all the love, the most honest things. You know the things are true, but when they are said they can pierce you. With his family and close friends, Manish has no filter. He just instigates me and touches the raw nerve which is rightfully meant to be touched.”

The conversation with host Gunjan Utreja soon shifts to food, and how it can affect Manish’s mood. Karan reveals, “I have been on like 8000 terrible diets that have ruined my metabolism. I am a silent eater. Manish starts getting into a bad mood if you don’t feed him. At one point, Manish threw a semi-tantrum. He dropped all the shopping bags, we were shopping for Priyanka for Dostana at that time in Vegas and he just said I don’t care feed me now I am not moving till you give me food. Manish said pancake khaana hai, we walked one mile to get pancakes. Manish can be hangry.”

Swinging in the fashion arena, KJo admitted he is a maximist when it comes to everything. “I am not a minimalist. I like OTT – clothes, films, people. Manish is an OTT person, that’s why I like him. I like things that are, like the millennials say, EXTRA. Manish has a very specific sense of his own. He is very flashy and flamboyant as a designer but very sober when it comes to his personal sense, he said. Manish added, “Clothes make Karan genuinely happy. For me, it’s all about doing great work and coming back to a great meal.”

“I don’t trust him,” Manish talks about Karan as the conversation shifts to their fights. KJo reveals how he once threw a garment at Manish on the sets of Kabhi Khushi Kabhie Gham, “I threw the garment at Manish and walked off. This happened very much before Sooraj Hua Madham. He had made some hideous lehenga, it looked like a kambal, a razai. I just said this doesn’t work. He said you don’t know. Cut two and we had chiffon sarees.”

The duo played Buzzkill and Under 5, and Karan stole the thunder in both of them!

Lastly, Karan touched upon the advent of social media and how it has affected lives. “With the advent of social media, what’s happened is everyone’s so much on guard, they are all saying and doing the right thing. Everyone is also putting themselves out every time, we have lost the mystery culture. Because there is so much of paparazzi culture, everyone is on guard no one is kind of doing what they were doing two decades or one decade ago. We could have a great time and a wonderful affair, and no one would know about it. I am not saying this just for relationships of love, even in terms of friendships and people in their personal space, all that has been compromised. Yes, there are large ups. We have international exposure, we have a huge fan base staring at us as a global industry. Of course, there is an upside, there is also a tremendous downside,” he opined. Further, he stated, “I have no problem being on social media. I love being on it. At midnight, I am at my stalking optimum best.”

Watch new Bollywood Movies like Jabariya Jodi, Uri: The Surgical Strike, The Tashkent Files and many others on ZEE5.

Exclusive: Ssudeep Sahir Shares His Birthday Plans With Us - Read Details Inside!