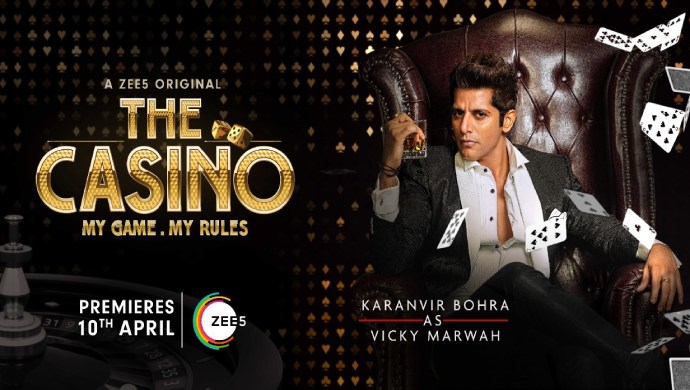 Karanvir Bohra, has been a recognised face on TV with the his show Qubool Hai where he had regularly managed to play the role of a villain and hero with equal ease. He has been a host and a contestant on reality shows. After exploring all there is on television, Karanvir is taking a leap into web series and OTT content with the Casino. He joins a strong cast including Sudhanshu Pandey, Mandana Karimi and Aindrita Ray among others on to bring this show to the biggest OTT platform in India, ZEE5.

Watch his interview with Mandana Karimi and Sudhanshu Pandey From The Casino here.

The tagline for The Casino is my game my rules. Whom does this line apply the most to on the show?

I think the line applies to everyone on the show because all the characters have their own mind games on the show. But mostly applies to Tarun (Katial CEO, ZEE5) because we all playing by his rules.

2. What can audiences expect from The Casino?

3. What was the experience shooting for the show in Nepal? We’ve see a lot of clips and images on social media.

That I will have to take credit for because I love Tiktok. People say they feel like I have a stake in Tiktok. But on a serious note I feel ZEE5 is an OTT platform and I feel we should be relevant on social media because is we don’t promote ourselves then who will.

4. You’re an actor, a producer and owner of a fashion line. Which role do you enjoy the most?

I love acting and that will always be my first love. Everything else comes from acting things I am interested in. I don’t like to sit idle so when u am not acting I explore other ideas. I’m also a father now and my children are still tiny and cute I love spending at lot of time with them. They’ve even become bffs with Mandana Karimi on set.

5. You’ve also been a part of Zee TV since the early years and now you are a part of ZEE5. How do you feel about making this leap?

The first ad I ever did was for Esselworld which I think was called Zee Essel at that time. This was even before ‘Qubool Hai’ and other shows that I did for Zee TV. I feel like my personality is perfect for an adventure park. But about the leap from TV to web I think the entire credit for this goes to Tarun again. He was the one who showed faith in me and in The Casino and it has been a wonderful experience.