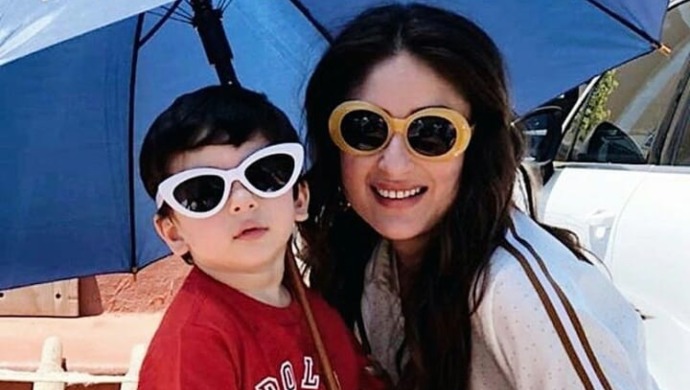 Kareena Kapoor Khan and Saif Ali Khan’s son Taimur Ali Khan is a celebrity in his own right. The two-year-old is paparazzi’s delight and a social media darling! It is news when Taimur doesn’t make the news. And his superstar parents are very well aware of the fan frenzy he commands! Speaking about her literally blue-eyed baby boy on the new chat show Pinch by Arbaaz Khan! “He is the man of the moment,” Kareena agrees with Arbaaz as they hit the topic.

Arbaaz read out several comments on Twitter and Instagram, some of them called Taimur as the ‘Barbie of India,’ ‘No 1’, and ‘biggest Khan of India.’ In her response, the sassy Mamma said, “ Well I have to agree to all the comments and he is the biggest Khan! We couldn’t agree more. Given the popularity and adulation, baby Tim indeed is the biggest Khan.

In her conversation with Arbaaz, Kareena touched upon subjects like social media trolls, the craze about Taimur and how they keep him grounded. Speaking about a certain toy that made headlines Bebo commented, “I don’t know understand where this is coming from. Because how do they know. Where is this information. It’s completely bizarre. I think sometimes they cross the line especially when it comes to Taimur. Jiss tarah se roj ki Taimur kya khaa raha hai, kaha jaa raha hai, kaunse kapde pehene hai, playschool mein jaa raha hai, gym jaa raha hai. You know everyday there is a picture of Taimur with Saif because he goes to the gym with Saif. Once in a while it’s fine, but everyday what is the reason to see this child? I understand bahot saare logon ne kaha hai he is so cute, he brings a smile to everybody’s face of course he does that but he is a 2 YO. You have to allow that person to live their life fearlessly, especially a child who is growing up.”

Off late, there are pictures and videos of Taimur going viral that show him waving to the media. Reacting to the same, Kareena said, “He is just looking at the media, looking at those lights and wondering what that is. Because everyone is like Taimur, Taimur. He is a friendly child. He is like okay somebody is saying Hi to me. Euphoria jo create kiya hai Taimur ke baare me that I think we can curtail.”

She further added, “Keeping him at him, or locking him up or hiding his face, it will scar him further. Covering his face jab airport pe jaa rahe hai, that will be more of a mockery. He will be wondering that why, because other 2 YO nobody is doing that. So let him live his life. And I am going to leave it to chance.”

When a troll said the nation will get tired of Taimur’s cuteness. “I completely agree. And we are hoping one day the nation will get tired.” The grounding factor always starts at home for the parents. And that is what we are going to be very aware of. Ab toh everybody is reacting kyunki he is our child. But what we have to tell him is he has to go outside, he has to go out there, make, achieve something from his life out of himself and then will be a star. Right now he is not a star in our eyes. He is our child in our eyes. That’s the way we look at it.”

Kareena even revisited her statement made on Karan Johar’s show about Taimur’s doll. “Wo barbie doll jo tha wo Taimur ka nahi tha, wo Chuckie the doll tha. I felt he looked scary. I think they just made a doll, they made him wear a bandhgala, I think ek baar Taimur got photographed with a bandhgala, toh ek pehna diya and it just like put blue eyes and said its Taimur. It didn’t look anything like Taimur. I was like how can you just sell this doll calling it Taimur? That is wrong.”

Watch the entire episode of Pinch by Arbaaz Khan featuring Kareena only on ZEE5 now!

Kareena Kapoor Khan And Saif Ali Khan To Have A Second Baby Soon? Find Out On Starry Nights 2.oh!

Did You Know Pad Man Is The First Indian Film To Be Screened At The Oxford Union?