In today's episode, Trisha calls off her wedding. Tipsy thinks that Karan will never love her and goes back to Mumbai with her male friend! 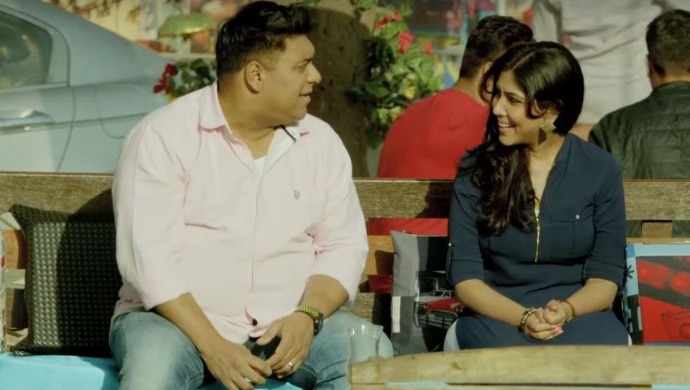 In the previous episode, Karan brings Trisha back from an unknown place and scolds her. The next morning, Tipsy brings breakfast for Karan and thanks him for saving her life. Karan tries to confess his love. But Sherry comes in and informs Karan about his competition. He decides to win Tipsy heart at any cost.

In today’s episode, Tipsy goes on a date with her childhood friend. Karan gets jealous and plans to interrupt their date. Karan goes and sits with them. He sees her drinking alcohol. Tipsy’s friend finds out about Karan’s intentions. They both start a competition to win Tipsy’s heart. Tipsy’s friend warns Karan to stay away from her. Meanwhile, Karan gets a call from Radhika to come to the hotel as soon as possible. Karan asks Tipsy to be safe and decide carefully and leaves. Tipsy’s friend asks for her decision.

Karan goes to the hotel and meets Radhika. Radhika tells him that Trisha is calling off the marriage. Karan gets shocked and asks the reason. Trisha replies that she doesn’t love Rohan anymore. Trisha tells Rohan that she doesn’t want to marry him, but Radhika forces her to marry him. She asks Karan to convince Trisha. Trisha says it’s only Karan who has treated her like as adult. Radhika blames Karan for all the issues. Romila’s husband also comes into the picture and blames Rohit for playing around with Romila. While going back to the room, Tipsy see Romila’s husband screaming at Karan. She tries to mediate the situation. She says in front of everyone that Karan is a very good human being, but he never shows this off. Romils’s husband says Tipsy is drunk that’s why she is saying good things about Karan. Tipsy says her getting drunk doesn’t change anything and takes Karan away to his room.

Later, Tipsy goes to talk to Karan. She gives him a chance to express his feelings. But Karan just gives her ring back to her. Tipsy asks if there is anything else he wants to say. He says no. Tipsy gets upset and leaves. Sherry asks what is wrong with her. Tipsy says Sherry that Karan will never love her. Sherry asks her if she loves him.

Tipsy’s friend comes to the room and says he is leaving for Mumbai. Tipsy asks if she can join him. He says yes.

Karan happens to see Trisha trying to talk to Rohan. Karan goes to Trisha to console her. Trisha hugs him and cries. Later, when Karan goes to Tipsy’s room, he sees her ready to go with her bags packed. He asks her if she is going anywhere. She replies that the de-addiction program is over and she is going back to Mumbai with her friend.

Will Karan be ever be able to get Tipsy back? Watch all episodes of Karrle Tu Bhi Mohabbat, only on ZEE5!

Watch state of siege:26/11 streaming only on ZEE5 Original

Hacked Movie Review: This Psychological Thriller Will Set You On An Adrenalin Rush!