In episode six, Tipsy successfully convinces Karan to stay in Mahabaleshwar. Karan talks to Trisha in a bar and apologises for his actions. 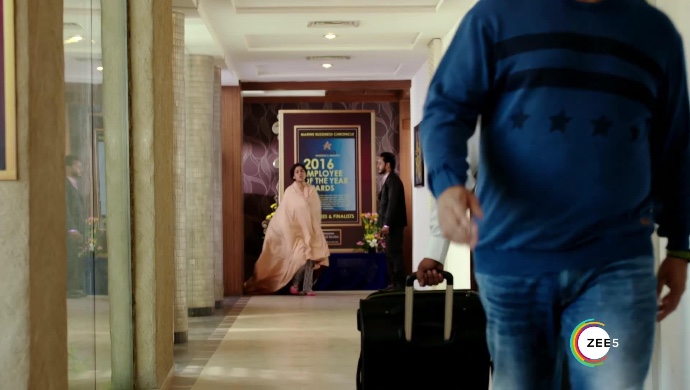 In the previous episode, the Romila gets on Tipsy and Karan’s nerves. Tipsy decides to give her sleeping tablets in her juice. Tipsy sends Karan to talk to Trisha and sort out his emotions. Karan goes to Trisha to give her the gift he bought for her. But Trisha ends up insulting Karam in front of Rohan and her friends. Tipsy comes to the rescue. She takes Karan to his room and makes him sleep.

In the current episode, Karan comes to Tipsy’s room and sleeps on her bed. Tipsy asks him to go to his room and sleep, but he ignores her. He also says to Tipsy that Trisha will not forgive him for what he has done to her. Tipsy consoles him till he is asleep.

Romila wakes up and finds Karan missing. She wakes Tipsy up too. Romila says to Tipsy that Karan isn’t there. Tipsy finds a note near her book. It says, “Leaving for Mumbai, will detox there”. Tipsy and Romila run out of the room to stop Karan. Romila’s family stops her and takes her away. Tipsy continues after Karan. Tipsy catches up with him and asks him to stop, but to no avail. They have a fight In addition to the fight, Karan goes to Romila and says that Tipsy mixed sleeping pills in her juice last night.

Later, Karan goes to find Trisha. Karan goes to the bar where Trisha was. At first, Trisha refuses to speak to him. She puts out a condition of getting her more beer. Karan has forgotten to carry his wallet. Karan puts out a show, one selfie for 2 beers. After getting the beer, they both sit down to talk. Karan apologies.

Will Trisha accept his apology?

Kunal Kumar: Amit Sadh And I Reunite After 20 Years In Operation Parindey