This Holi 2020, Sunburn brings you international DJs KSHMR and Vini Vici with Indian acts like Ritviz for two happening parties in Mumbai and Pune. 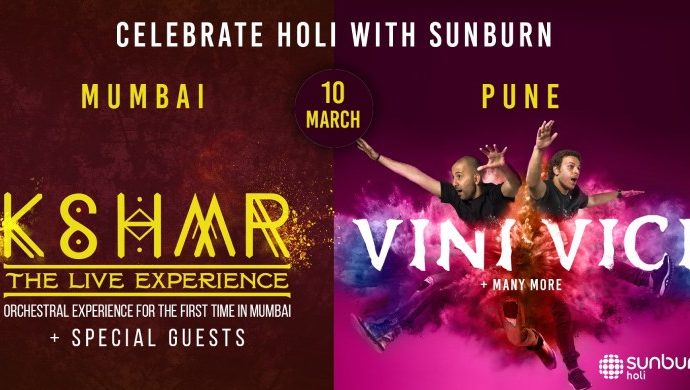 As February comes to an end, everyone is gearing up to celebrate Holi. If you haven’t made party plans for Holi yet, ZEE5 has got you covered. Sunburn Arena brings the most happening Holi parties to Mumbai and Pune this year. KSHMR, the internationally acclaimed DJ, is set to perform at Mahalaxmi Racecourse in Mumbai with special guest artists. ZEE5 the official streaming partner for Sunburn will be streaming live on ZEE5. The Sunburn Holi party in Pune will feature Vini Vici as the headliners.

Watch the promo for the Sunburn Holi Party in Mumbai.

Mumbai is set to witness a special performance by the DJ KSHMR. He is doing this Holi event as charity show, because he wants to give back to India which has given so much love and appreciation to him. All the proceeds from this event will be donated to the betterment of children including the NGO ‘Saturday Art Class’ which aims to improve the lives of underprivileged children through art.

This event is well represented by homegrown talent as well. Emiway Bantai, an established rapper in the Indian hip-hop, is set to get the crowd going. Ritviz who became widely popular with his tracks Udd Gaye and Jeet returns to the Sunburn Stage after performing at Sunburn 2020.

In Pune, Vini Vici are set to bring the house down with their Holi party. Vini Vici are returning to India after their memorable performance at Sunburn 2020. This event is set to happen at Royal Palms Koregaon Park, the most happening part of the city. You can catch both these events live or watch the live stream of the Mumbai event only on ZEE5.

Watch the promo for the Pune Holi Party with Vini Vice here.