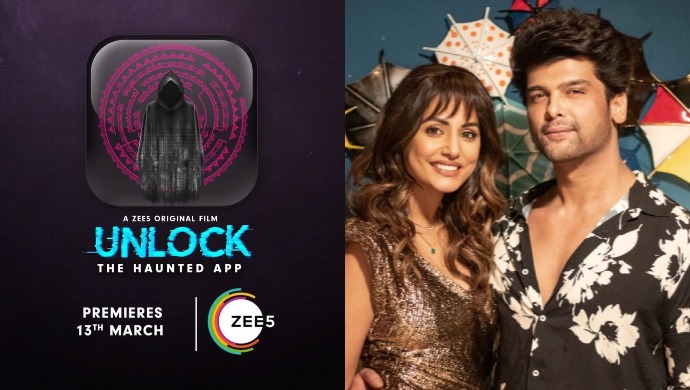 Popular television stars Hina Khan and Kushal Tandon will soon feature in the upcoming ZEE5 Original film titled Unlock: The Haunted App. The two actors will be seen together for the first time on-screen, in a scary, sexy and app-solutely fun tech horror film. Scheduled for 13 March 2020, the film is bankrolled by Krasnaya Corporation LLP and Horse Films LLP and directed by Debatma Mandal.

Television bahu turned babe, recently seen in the Bollywood film Hacked Hina Khan is playing the lead role of Suhani with Bad Company fame Kushal Tandon, essaying Amar. The film also stars former Miss India World 2015, Aditi Arya, portraying Riddhi, along with Qubool Hai actor Rishabh Sinha. Suhani realises that she is about to lose the man of her dreams Amar to her flat-mate Riddhi. Suhani will do anything to make it right, even if it is installing an app off the deep web that grants your darkest wishes. Things get pretty ugly and the question arises whether she will succeed or get trapped in her own deed.

Have a look at the intriguing and spooky logo here:

The makers of Unlock: The Haunted App recently shared the logo of the film on 11 February 2020 via social media. It looks promising as it sends chills down the spine for its gritty and dark presentation. Set in the metropolitian city of Mumbai, it explores the shady side of the internet and social media that most people remain oblivious to. It makes you question yourself, “Am I using my phone or is my phone using?”

In an interview with India Today, Hina Khan shared her view by saying, “Technology is changing so fast and its reach is growing immensely. With ‘Unlock: The Haunted App’, we will show the dark side of the web which most people are unaware of. I’m glad for this association with ZEE5 and excited about this interesting film”.

Kushal Tandon also had something to say, “Tech horror is an extremely interesting genre and I’m thankful that I got a chance to work with ZEE5 on this film. The script is well-layered and every character has demons which will come alive as the film progresses”.

We have more! Don’t forget to binge-watch all your favourite Zee TV shows streaming on ZEE5!

It Happened In Calcutta Teaser: A Love Saga With The Backdrop Of Cholera Outbreak,'71 War