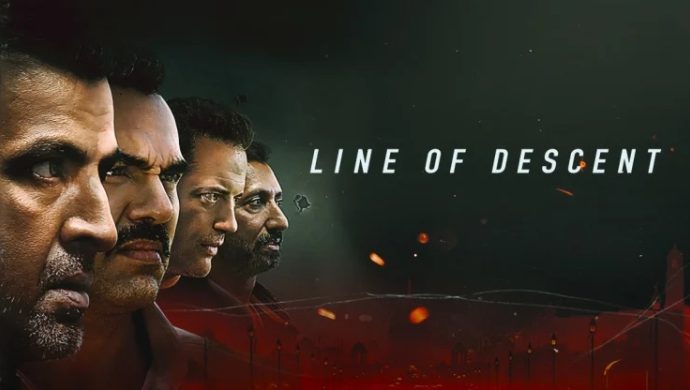 It is not often that you see a film about gangsters that is real and edgy, and yet not gory and bloody. Line Of Descent is just that! It centers around the life of the Sinha family who are part of the land grabbing mafia in Delhi for decades but are slowly losing everything. Prem Chopra returns to the screen after a long time as an aging father and gang leader. Ronit Roy, Neeraj Kabi (The Final Call) and Ali Haji play the role of his sons who form the crux of this film. Abhay Deol and Brendan Fraser play vital and interesting supporting roles.

Watch the trailer for the movie here.

Ronit Roy and Neeraj Kabi run the show with their contrasting characters. Ronit Roy as Prithvi Sinha is a dutiful son who wants to get out of the crime business and focus on their family-run electronics showroom. Neeraj as Siddharth or Sid is an unpredictable alcoholic who wants to expand as a mafia family by getting into arms trade as well. Their conflict is at the center of this film and their performances do complete justice to the role.

Prem Chopra plays the role of an ageing criminal who is tired of his evil ways. It’s almost a kind of mirror to his career as an actor who is most popular for being a villain. It’s amusing to watch Prem Chopra blurt abuses like a true blue Delhi gangster. Brendan Fraser plays the role of Charu or Charlie, an eccentric arms dealer disguised as a garage owner in Delhi. While he sinks his teeth into this role, it can get difficult trying to decipher his accent at times.

Abhay Deol brings the whole plot together as the righteous cop  sporting a mustache who is all out to get the Sinha family arrested. Ali Haji, previously a child actor in movies like Fanaa and Partner, comes of age, in this movie playing the nuanced character of, Suraj Sinha, a young man trying to escape his family and their crimes.

One of the major drawbacks of this film is that none of the female characters are explored well. They are either hiding in the bedroom or in bed with the male leads. Anisha Victor (REJCTX) and French Actress Charlotte Poutrel get the meatiest roles for women and do complete justice to it. While the film is gritty and real, it shies away from showing violent scenes saving the brutality for later.

The film is shot in Bombay but it feels like the family is based in Gurgaon. The no-frills, no glamour approach to crime is unique and one that is not seen often. There are no songs in the movie, but even the background score is minimal. It’s refreshing to see a movie where gangsters don’t get a walk-in or drive-by music after or while they commit a crime.

The film takes time to build and the climax is sudden, much like all the twists in the movie. Watch it for the brilliant performances by all the actors, as well as the unique ‘comebacks’ of Prem Chopra and Brendan Fraser. Have you already watched the movie? Let us know what you think about it in the comments below.