Mark Your Calendars As ZEE5 Drops Operation Parindey, Mentalhood And More This March 2020

Indulge in #ShadesOfEntertainment that ZEE5 has to offer in March 2020 as we bring shows like Mentalhood, State of Siege: 26/11 and more. 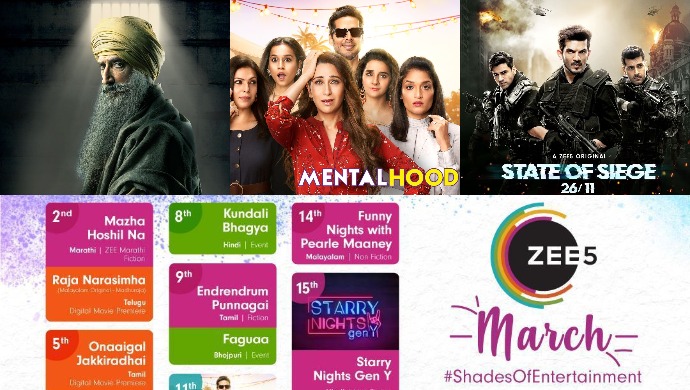 With a new month, ZEE5 once again comes with a new dose of entertainment. Known to be one of the fastest-growing OTT platforms in India, we bring you some impressive list of shows that you can indulge in. From thrilling series inspired by true events like Operation Parindey to Karisma Kapoor’s OTT debut with Mentalhood, there is entertainment reserved for everyone. In fact, some popular shows are also returning with a new season, some that you shouldn’t miss.

For the crowd who likes to be at the edge of their seat, ZEE5 will be dropping Operation Parindey on March 7. The show is inspired by true events of one of India’s most controversial jailbreak. Spanned across eight episodes, the show stars Rahul Dev and Amit Sadh in pivotal roles. Perhaps you should read up about the Nabha jailbreak to get a gist of the show.

For the ones who would like to see Lolo return to the acting space after a seven-year-old hiatus, you’d be happy to see her play a multitasking mother of three kids while navigating through the jungle of Mumbai’s mom crowd in Mentalhood. The show also stars Tillotama Shome, Shilpa Shukla, Shruti Seth, Sandhya Mridul and Dino Morea in important roles and is set to release on March 11.

Another thrilling story inspired from real-life events will be dropped on March 20, as ZEE5 presents State of Siege: 26/11, a take on the role played by NSG commandos, who saved Mumbai from bleeding on the fateful 26/11. The series stars Arjun Bajwa, Arjun Bijlani and Vivek Dahiya as NSG commandos.

ZEE5 Bengali and Marathi are looking forward towards the return of Kaali: Season 2, which will be released on March 27. Make a note on your calendars as Hamlet will be available on the platform on March 29. A new Tamil show is going to be introduced on March 9, Endrendrum Punnagai, a story that revolves around an older business tycoon and a young woman in her early 20s. Expect a laughter riot from March 14 as Funny Nights with Pearle Maaney will start airing on ZEE5 Malayalam.

A few digital movies will make its way to ZEE5’s OTT platform. Brace yourselves as Zee Telugu has some interesting new contents to entertain you. On March 2, the digital movie Raja Narasimha will be premiered. The month then follows Amruthan 2.0 on March 25. Zee Malayalam will see Prathi Poovan Kozhi, premiering on March 6 and Ente Peru Surya Enpe Veedu India on March 18. Meanwhile, Zee Tamil will see digital films like Onaaigal Jakkiradhai on March 5, Vidhi Madhi Ultaa on March 12 and Thangaratham on March 19

For the ones who like to indulge in award ceremonies and like to see their favourite stars perform, you are in for a treat! March 14 will see Sonar Sansar Awards on Zee Bangla, Zee Chitra Gaurav Puraskar on March 22 and Zee Cine Awards on March 28.

Watch The Second Season of Broken But Beautiful, Now Streaming On ZEE5