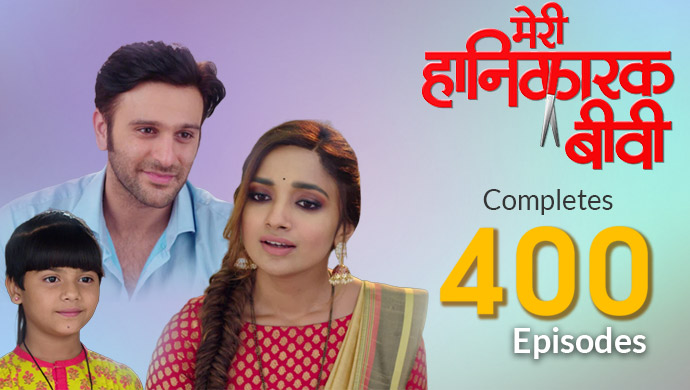 Breaking the stereotypes of the Indian TV shows, Meri Hanikarak Biwi completes 400 episodes today. Over the years, this show has proved how a serious issue like vasectomy can be presented in a light-hearted way. Characters like Akhilesh (Karan Suchak), Ira (Jiyaa Shankar), Pushpa and Devina have become household names now, all thanks to its loyal fanbase. Especially the character of Akhilesh, who was seen at the beginning as a village simpleton is now transformed into the smart and dashing businessman. Whereas, the character of Ira is now the mother of a 5-year-old daughter, Mishri.

Apart from the leads, characters like Mishri, Pushpa and Devina have created a long-lasting impression in the audience’s mind. Another thing that we would like to include is that the show has also managed to keep the viewer’s attention intact after taking the leap. Take a look at the celebration pictures followed by the video.

Currently, on the show, Ira is still angry on Mishri for playing a prank on Vansh. Akhilesh and Vansh give her an idea to apologise to Ira by giving her a surprise. Mishri decides to do a special dance performance for Ira but unfortunately, Devina learns about her plan and locks Mishri in her room. Immediately, she dresses up Mirchi and sends her to Ira. After a few moments, the policemen arrive and tell Ira and Akhilesh that they have received a complaint of violence. Mirchi comes forward and tells the policemen that she was the one who called them. Later, Devina hints Mirchi to come back and unlocks the real Mishri’s room. Seeing all the mess that happened she apologises to the policemen and takes her complaint back.

It will be interesting to see how Mishri reveals Mirchi and Devina’s secret? Let us know your thoughts in the comments with the hashtag #MeriHanikarakBiwi.