Mother’s Day: Tips On Modern Parenting From Meira, Diksha And Aakash Of Mentalhood

Only a mom knows #MotherhoodKeChallenges. Here are a few tips from moms of Mentalhood that you'll relate to. 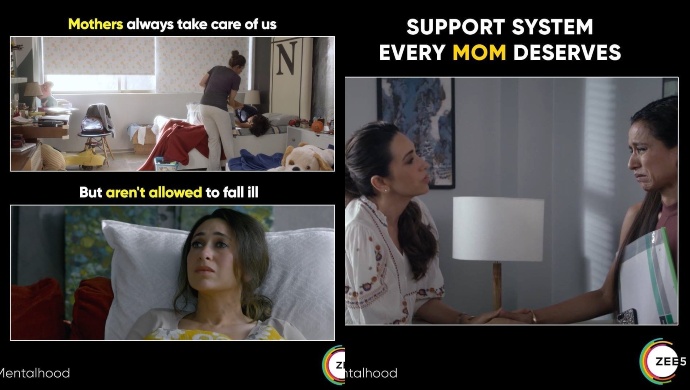 Being a mother is the most underrated job on the face of the earth. Moms sacrifice so much from the time they carry us in their womb, to raising us into adults. Every year, the second Sunday of May is celebrated as Mother’s Day, a day to celebrate their unconditional and selfless love. In 2020, May 10, is the auspicious day. Commemorating the spirit, Mentalhood is a ZEE5 Original comedy-drama series that talks about the madness every mom goes through. In changing times, people are adopting modern parenting techniques. So, here are some Instagram tips to learn and apply during #MotherhoodKeChallenges.

Watch the first episode of Mentalhood for FREE here:

The ‘boho mom’ Diksha Shah, essayed by Shruti Seth, advocates for nonconformity of gender barriers. She is a single mom who defies the age-old rule, that blue is a boys’ colour and pink is for girls. She only encourages her child to be expressive through whatever he likes. Dino Morea, playing a stay-at-home single dad Aakash, also backs her up by saying that his son plays with dolls and can’t sleep without it at night.

Meira Sharma, aka ‘mental mom’, played by Karisma Kapoor, believes in befriending her children. She creates a bond with her 13-year-old daughter, Amyra, and discusses her personal life. Often children feel shy and awkward to share matters with their parents, but it is important to make an open and free space so children can be comfortable with you. Meira is even seen talking about Amyra’s dating life with her.

3. Give your child home-cooked food rather than junk

Most kids enjoy unhealthy and junk food over mom-made healthy dishes. At the dining table, Meira’s husband Anmol Sharma (Sanjay Suri), brings four large boxes of pizza for their three children, Amyra, Nikhil and Arjun. His intention is to take some cooking workload off her shoulders. But, Meira is strictly pro-health and she replies back with, “No way, no pizza. I don’t want to kill my kids by feeding them gluten.”

4. Make memories with your kid

Depicting the precious mother-daughter bond, Meira Sharma gossips and chills with Amyra in the kitchen. Preity Khosla (Tillotama Shome), the ‘pushover mom’, tries to teach her son cooking when he fusses about it. Single dad, Aakash, takes his twin children to shop at the mall and plays little games with them at times. And Diksha Shah makes memories with her son while sitting by the beach and telling him stories.

Meira’s everyday routine includes waking up early morning, and pulling her children out of their beds, while they whine about sleeping for five more minutes. But, when Meira falls ill, everyone is after her whining about not wanting to eat the same old khichdi, and needing their mother to help them prepare for a school test. Indeed, mothers take care of us always, but when they take sick, the house comes to standstill.

2. Every mom needs a support system

At the hospital, Preity Khosla breaks down when she learns that her 10-year-old son, Timmy has juvenile diabetes. She worries about the fact that he will have to take insulin injections, and will be left with no life. In such times, strong moms need their hands held. Meira does the same and comforts her by stating methods of cure. Aakash also assures her that it is a lifestyle disease, and can be reversed with habits.

Stay-at-home single dad Aakash is a mother and a father to his kids. With twin children through surrogacy, Naks and Tara, who are merely four-years-old, he struggles to answer their ‘scary’ questions. Her daughter Tara demands, “Papa, I also want a baby!” He shares this instance with Meira over the phone and finds himself in a pickle. Truly, parents face a lot of trials and that’s what makes them imperfectly perfect.

4. Kids are only the mother’s responsibility?

Parenthood literally means the contribution of the mother and the father equally. It is often mistaken as only motherhood. Meira’s husband Anmol staunchly says, “Even I can take care of the kids, no big deal!”. To which Meira’s raises a valid point and breaks the stereotype of “Hum kare toh motherhood, aap kare toh ehsaan?”, translating as, “If we do, it’s motherhood, but if you do, it’s a favour?”

To watch some more motherhood madness and learn modern parenting, watch all the episodes of Mentalhood on ZEE5 Originals.