Zee TV's new show Movie Masti With Maniesh Paul will feature a bunch of Bollywood celebs and shall test their filmy quotient as compared to a commner. 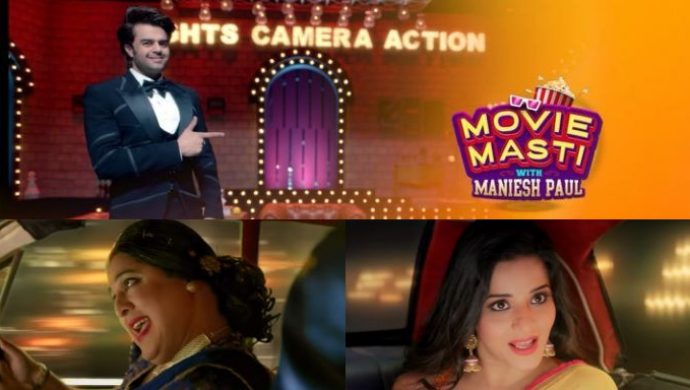 Are you a bunch of masala movie mad-hatters? Do Bollywood films give you the much-needed ‘kick’? Hop on board, and join Maniesh Paul, Ali Asgar and Monalisa on a crazy ride! The former anchor-actor and comedian is set to headline a laugh riot of a Bollywood game show – Movie Masti With Maniesh Paul. Ali and Monalisa comprise a nutty, quirky family obsessed with Bollywood in the show hosted by Maniesh. Notably, Paritosh Tripathi and Balraj Syal too are a part of the comedy show. The first-of-its-kind light-hearted joyride will feature on Zee TV and the recently released promo is making us excited already. So much so that we wish 5 October comes here already, since that’s when it goes on the air. The show is a weekend offering and shall air on Saturday-Sunday at 9:30 pm.

The video begins with Maniesh having a weird dream about Guddi (Ali Asgar) and a smokin’ hot Monalisa kidnapping a celebrity in their car, going around the Maut ka Kuan (the well of death). As he snaps out of his dream and prepares to host a superstar, he is shocked to find it has come true. The show, as Guddi mentions, will have two rounds.

“There you go!!! My very own game show!!!bollywood knowledge ka test…celebs… and one crazy filmy family!!! Aanaa zaroor…love u all… aapka MANIESH PAUL…,” Maniesh wrote while sharing the promo. He also thanked producers Neeti Simoes and Preeti Simoes for the comedy game show.

Talking about the show, Maniesh was reported by an entertainment news portal as saying, “I was hooked to the idea right since the producers and creative team narrated it to me. In fact, it’s a treat to a Bollywood buff like me and I am thrilled to not only host it but also get to test the Bollywood quotient of some of India’s hottest movie stars.”

Stay tuned for more updates about Movie Masti With Maniesh Paul. Don’t forget to share your thoughts about the upcoming show in the comments section below.

Have you watched Maniesh Paul’s confession on turning gay for Ranveer Singh, on Starry Nights, here:

Watch ‘Bhoot Purva’ a ZEE5 Original horror comedy. This webseries stars Zoa Morani and Rishabh Chaddha, where one partner returns to be with the woman he loves.

Daughter's Day Spl: 9 Daughters Of India Who Broke Every Stereotype Created By Society