Naghma Rizwan Of #ItHappenedInCalcutta: I Couldn’t Talk For Hours After The Abortion Shot

Naghma Rizwan of the ZEE5 Original series It Happened In Calcutta opens up about scenes that moved her & how she'd never date a Casanova like Ronobir! 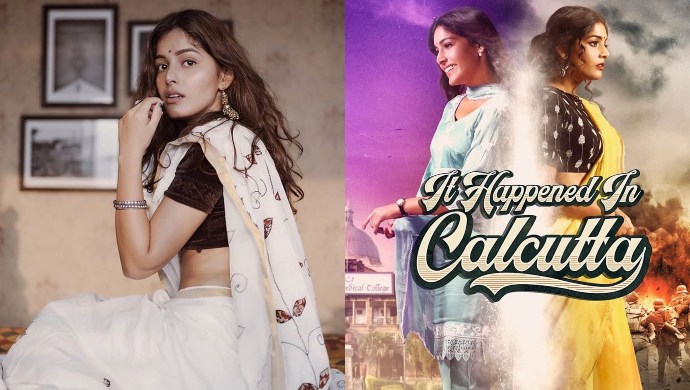 The leading lady of It Happened In Calcutta, Naghma Rizwan has made her digital debut in the industry and how! She essays Kusum Ganguly, a strong yet sensitive woman, far ahead of her times. An aspiring doctor, she is the first female M.B.B.S student at Calcutta Medical College. In an era when women weren’t allowed to pursue their dreams freely, Kusum broke the norm that females could only become nurses and became the first army doctor of her family in five generations.

Though skeptical about the institution of love, she falls for Ronobir Chatterjee (Karan Kundrra). The ZEE5 Original retro love saga revolves around Kusum and takes you on her journey through her medical studies, the cholera epidemic, falling in love, getting her heart broken, becoming an army doctor, and being a PoW in the Indo-Pak war. In an interview, Naghma Rizwan shared her joy at auditioning for the part and making the teaser video:

1. As this is your debut, how was the entire process and experience of auditioning for Kusum Ganguly?

It was great! Firstly, I’m not from the acting background at all. I’m an interior and furniture designer. But an advertisement happened, and I thought I should try this. Ken Ghosh, the director, seeing my Instagram videos and pictures, found an aesthetic Bengali girl in me. So he called me for an audition and it went really well. When I cracked it, I felt that this was meant to be!

2. How did you feel about being selected by Ekta Kapoor after testing 200-300 girls for two and a half years?

You know what? When I went for the audition, all the girls were staring at me. One of them came and showed me a picture of myself. Actually, Ekta Kapoor and Ken Ghosh were circulating my Instagram photos and the teaser video I had made, as reference for Kusum Ganguly. I was stunned at the belief and trust they had in me, despite me being so new and inexperienced. I feel blessed for such a huge opportunity.

3. Kusum becomes an army doctor and later a prisoner of war (PoW). How did you prepare yourself mentally?

The backdrop of the series is tragedy! And as a personality, I’m happy-go-lucky and serious/intense both. So I go into my artist zone and know when to switch! For Kusum, I also derived from my personal life, as to how I will feel or emote. Ken sir and Ekta ma’am used to brief me very clearly and so I kept it very natural. My intensity in the latter Kusum is not over nor under, it’s very much ‘there’!

4.  How similar or different is Naghma Rizwan from Kusum Ganguly?

Well, the surface is different but the core is the same. Our lifestyles differ a lot. I, Naghma, come from an art school and live in the 21st century. But as a girl, in terms of love, I’m similar to her in the way she experiences and emotes her heartbreak. Otherwise, I’m very different. I would never date a casanova like Ronobir!

5. How was your experience of getting the 70s’ look, the retro hairstyle and vibrant costumes?

It was super fun! Salwar-kameez was a bit tedious because of the constantly falling dupatta. Everyone was holding my dupatta on the set, except me! But, I loved the sarees because I’m very comfortable in them, as I’m born and brought up in Kolkata. I can play basketball in saree. And getting my hair and make-up was fun because my look was very simple yet elegant!

6. Your character graph goes through heartbreak, abortion, war, love triangle, medical studies, etc. How was it doing all of that?

For the scene wherein she gets an abortion done, I went into a completely different zone to experiment emotionally, because I’ve never experienced it in real life. And after giving that shot, I couldn’t talk to anyone for two hours! Living her character was so intense overall. The extremity of her denial of love was very interesting and challenging to play.

7. Karan Kundrra is an experienced actor. How was it working with him and romancing him for the first time?

He is my first co-star ever and he is amazing! Our first meeting was very funny. I was at a workshop and Karan had come with Ken Ghosh. When I got up to greet him, my head hit his chin. Then, I went for a hand-shake and he went for a hug. Looking at each other, we interchanged it. It was funny! He has 11 years of experience, but he respects newcomers. He was very caring and helpful on set.

8.  Harman Singha also brings a twist in the series as Ratan Bagchi. How was it sharing screen space with him?

He is a cutie! Harman and I are from the same tribe and share the same vibe. On the set, we would make our own plot twists wherein Kusum and Ratan are in a parallel universe! So, when we had so much fun, it was very comfortable to work with him. He was very supportive of me as a debutante. And I had become his pet!

9. In a scene, you say “It’s not boy’s section, it’s the M.B.B.S section!” What is your opinion on Gender Equality which is this year’s UN International Women’s Day theme?

You know, we are four sisters! And I’m lucky to have parents who are so supportive of whatever I want to do. Coming from an artist background, I never doubted myself, whether I or someone else will be preferred. When a woman believes in herself, 90% of the work is done. And the rest 10% you can get done anyhow. To the guys, I would say, when a man supports a man, the game changes! My father and mother both raised us with equality!

10. Have you faced gender inequality? And how can a change be brought into society?

Yes, I have faced gender inequality in terms of payment! Be it the acting or the interior designing industry, they always feel that men are physically and mentally strong. Which is not true! I still fight against patriarchy. What needs to change is the assuming mindset of people who think that women will get married, have kids and then lose interest in their work. But no, women can manage family and job equally. They need to come out of their ideology of women as the weaker gender!

11. Lastly, how is the initial response that you’re getting for It Happened In Calcutta and Kusum?

Oho, maza hi aa gaya hai! I wanted to celebrate with my family. So I flew down to Kolkata and went home. I was sitting in my bedroom and my dad was messaging me from the living room saying that he is so proud of me and he loves. Then, he came to my room and started crying. He couldn’t believe that their nerdy and weirdo daughter is an actress now. It was really sweet! Then, my phone couldn’t stop beeping from all the messages of random people appreciating my work. They told me I’m a natural, yay!

Watch all the episodes of the yesteryear love saga It Happened In Calcutta, streaming exclusively on ZEE5 Originals!