Take a look at this young actor mimic his favourite actor. 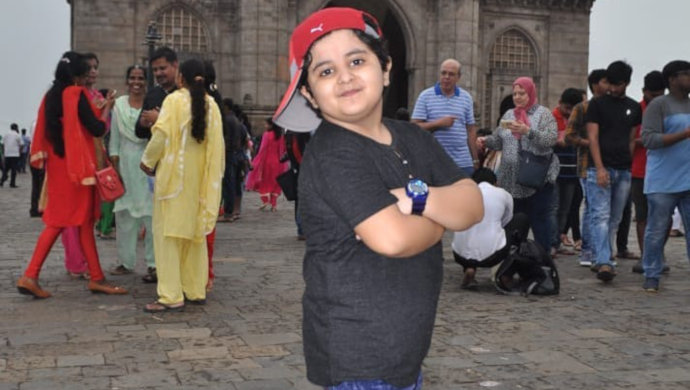 Nirnay Samadhiya is popularly known for playing the role of Bal Krishna in And TV’s popular mythological show Paramavatar Shri Krishna. This cute little actor enjoys a good fan following as he is an adorable kid and has won everyone’s hearts over a period of time. His performance on the show is worth appreciating, have a look:

But recently, there was something interesting that caught our attention – his wish to become a big star one day like Bollywood superstar Salman Khan.

So like the millions of us around the world, Nirnay is also a die-hard fan of Salman Khan. This was revealed during one of Paramavatar Shri Krishna’s promotional events attended by Nirnay and Gungun Uprari (who plays Mata Yashoda in the show) in Ahmedabad. When asked what he loves to do, Nirnay said, “I love to act, play games on my tablet and totally love milk, unlike Krishna who loved butter. I love Ahmedabad too! I also admire Salman Khan a lot.”

Nirnay has also posted a picture of him posing in front of a poster of Salman Khan’s film Race 3 (2018) to his social media account.

Watching Race 3 Eid Mubarak to all of u

Isn’t that ‘Dabangg’ style pose of Nirnay cute?  Now, we are waiting for the day when our chotta Sallu gets to meet his idol. What do you say? Let us know in the comments section below.

Tune into ZEE5 to watch the season finale of Karenjit Kaur: The Untold Story of Sunny Leoneon 5 April, 2019.

Have You Heard Kamna Pathak Aka Rajesh From Happu Ki Ultan Paltan Sing? Check It Out