Not Just Flirting, But Vibhuti From Bhabi Ji Ghar Par Hain Is Good At Cooking Too!

Aasif Sheikh once treated his friends and co-stars with his special homemade biryani. Find out more. 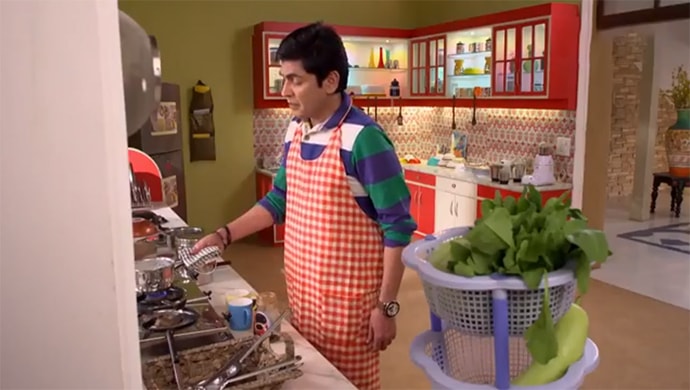 Aasif Sheikh is one of the few actors who have a strong influence in both the silver screen as well on the small screen, in their career. He has done many popular shows on television over the years. Currently, he is seen playing the role of Vibhuti Mishra on the popular show aired on And TV, ‘Bhabi Ji Ghar Par Hain!’ His character in the show is that of a jobless husband who does all household work which includes cooking as well, have a look:

The ones who love to see this show would pretty well know that the character of Vibhuti loves to cook and this was something that made us go nostalgic. How? Let’s break this to you.

It was in the early 90s when Aasif had played the lead role in a film titled ‘Yaara Dildara’ (1991). This film featured the track ‘Bin Tere Sanam’ which today enjoys a cult following and is still one of the most searched videos on YouTube. There’s one particular shot in this romantic song that features him with actress Ruchika Panday. It is that he is seen trying his hand at cooking for his ladylove while humming the lines ‘Sab sahenge hum.. Aur hasenge hum.. Aa meri zindagi..”

So, indeed this shows that Aasif’s ‘screen’ love for cooking goes back a long way. From then to now the reel Vibhuti has been left with no choice but to cook for his ladylove which he does with a smile on his face.

In fact, not many would be aware of this that the actor even loves cooking in real life also and loves serving them what he prepares. He said in one of his earlier interviews, “I love cooking and more than that, (I love) feeding people I know. Seeing the satisfied look on their faces makes me so happy.” Aasif once treated his friends and co-stars on the sets of ‘Bhabi Ji Ghar Par Hain!’ with special homemade biryani. Now, isn’t that awesome? No matter how nulla his TV character is, but in real life, he has all the perfect qualities a woman would want in her partner.

Did you know about this fact about the actor? Let us know in the comments section below.

Watch Table No.5 Where Interesting People From Different Walks Of Lives, Strike Conversation Which Turn Out To Be Bizzare And Controversial

Ayyaz Ahmed's Hidden Talent That You Probably Weren't Aware Of