Paramavatar Enemies, Bal Krishna And Kans’s Bonding In Real Life Is Too Cute To Miss

Despite being pitted against each other in Paramavatar Shri Krishna, Nirnay Samadhiya and Manish Wadhwa's bond is making us go 'Aww'! 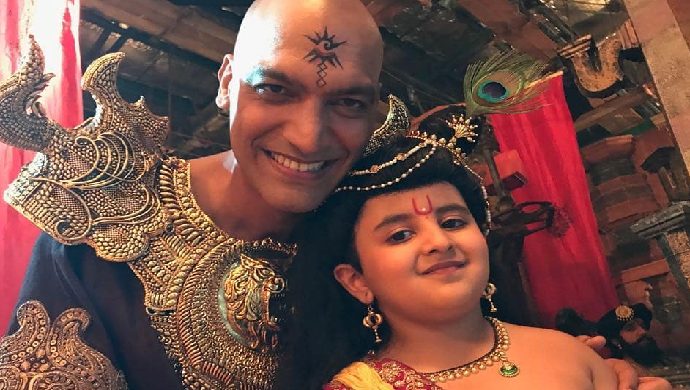 Well, most of us (born in the 90s and earlier) have grown up listening to stories of Lord Krishna. So, it’s quite obvious that we will know something about the characters in his life journey. Now, the mention of Kans in it is something that cannot be missed for sure. Considered to be one of the most epic villains from the Hindu mythology, Lord Krishna had taken birth on the earth to kill Kans.

In popular culture, And TV’s popular mythological show Paramavatar Shri Krishna has left no chance to mesmerise the audience in narrating the enmity tale of Bal Krishna (played by Nirnay Samadhiya) with his uncle Kans (played by Manish Wadhwa) so perfectly. Take a look at the latest episode of the show:

Both, Nirnay and Manish’s onscreen enmity have won our hearts time and again. But, in real life, their bonding on sets is equally strong and their banter in between the shoot of their show is something unmissable. Yes! You read that right.

Recently, we came across watching a picture and a video from the sets of this mythological show where their on-set masti and banter is something which left us amazed. Nirnay Samadhiya aka Bal Krishna posted on his Instagram account a picture, where he is seen pressing Manish aka Kans’s neck.

Take a look at the posts which shows the real adorable bond between the reel enemy Mama Bhanja duo.

Apart from this, there’s also a small video posted where they both are enjoying. They are seen doing a dwand yudh (hand to hand combat) with each other, in which Manish picks up Nirnay at the end with a big smile on his face.

Isn’t that cute? We must say both these actors have impressive acting skills.

What was your reaction after watching this? Let us know.

Watch Allu Arjun In His Rowdy Avatar In Surya The Soldier