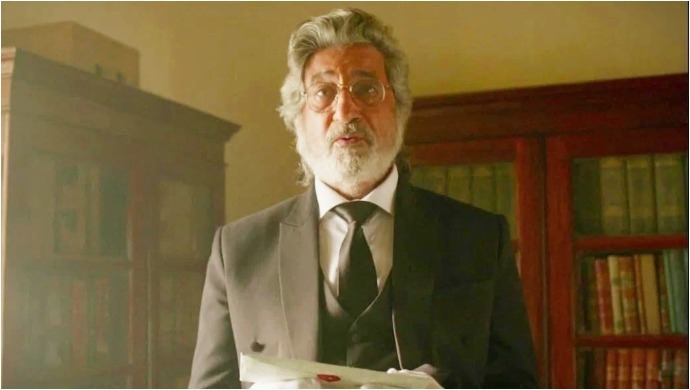 What is your first impression when you think of a horror show? Blood-smeared faces, scary screams, and bone-chilling suspense are quintessential to any spooky story. But the paranormal short stories penned by Ruskin Bond tend to look at ghosts and spirits under a fresh microscope. The same is depicted in ZEE5 Original Parchhayee: Ghost Stories by Ruskin Bond. Four episodes into the series, we knew this wasn’t a regular ride. The fifth episode, Astley ka Intezaar, starring Shakti Kapoor, only cemented our belief.

Directed by Samimitra Das, Astley ka Intezaar offers a taste of refined loyalty. It begins with the shot of a magnificent dining area in a beautiful mansion. The sound of Shakti Kapoor’s approaching footsteps and the ticking of the clock break through a layer of silence in the room. Meet Prem Bahadur, played by Bollywood veteran Shakti Kapoor, who is the caretaker of ‘Casa,’ a mansion owned by the Astley family.“Butter mein kami nahi honi chahiye,” Prem murmurs to himself while spreading a dollop on a slice of white bread. “Friday, Orange juice!” says Prem and pours a glass of fresh orange juice. He then eagerly waits for his master to arrive and sits down in a corner to have his breakfast.

‘Casa’ is actually a mansion that belongs to Robert Astley, who has been missing for the past three decades. But thirty years of disappearance and death rumours don’t stop Prem from serving his master, even in his absence. He goes about his daily routine – from keeping the bathtub ready to put together his Golf kit on Fridays, Prem Bahadur misses nothing. He is the reason every piece of furniture in Casa looks like brand new, for time has stopped in Casa for thirty years! Newspaper boys are shown discussing the same and drop a little introduction of Robert. He was into mountaineering and was even said to have been spotted a few years ago.

Prem is visited by his daughter, son-in-law and grandson Bittu. His daughter and son-in-law have come with the intention of taking their father with them, but he refuses to come along. They persuade him to leave the mansion since there is nobody left in the family anyway. But Prem suggests that it appears from the outside that there is no one, but he further fills the air with thrill saying he knows about the inside.

Despite Prem’s waning to not talk about Casa, his daughter and son-in-law end up having a gala time in the mansion. Only to be interrupted by someone, who brew trouble on their supposed romantic moments! On another occasion, they both are attacked by an invisible force and chased out of Casa. Has Robert Astley returned? Will Prem finally meet his ‘Bobby Baba?’ The climax scene beautifully answers these questions, also solving the mystery of ‘Astley ka Intezaar.’

As for the tunes and melodies we hear in Parchhayee episode 5, they keep you hooked and intrigued. The detailed beauty of the mansion, getting the nuances of Goan houses right and Prem’s dedication to every flower in Casa’s garden is aced to perfection. Offering breath-taking views of locales around Goa, including a Church and the tall coconut trees, the screenplay stands out to hold a viewer’s attention. The red vintage car, Prem’s attires, his costume changes as the needles of the clock move from one duty to another are all bundled perfectly in an entertainment package!

Coming to the supporting cast, every single character performs their brilliant best to add up to the beauty of Prem Bahadur’s role. Loyalty is the only weapon in his arsenal!

The above-mentioned factors combined make for a poignant narration of a limitless tale of love and loyalty. Astley ka Intezaar is more than just the chills and thrills, it has something for everyone in the store.

Love crime thrillers? Watch Abhay, a ZEE5 original that has got everyone hooked.