Phone-a-Friend Trailer:This ZEE5 Original Sci-fi Series Will Leave You Awed By Its Premise

Phone-a-Friend premieres on ZEE5 on 7 April. With Swati Kapoor and Akhlaque Khan in lead roles, the series features RJ Mantra as a talking cellphone! 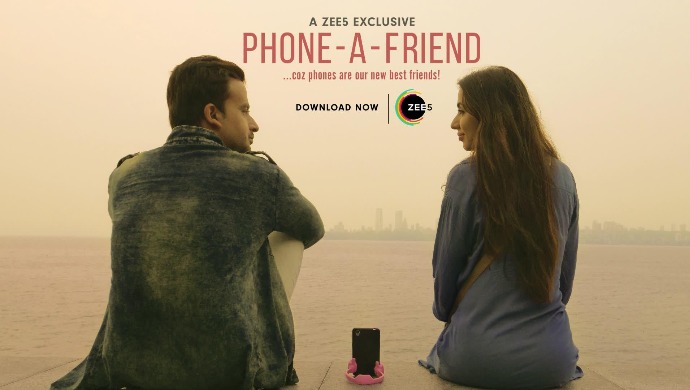 Phone-A-Friend is an upcoming ZEE5 Original sci-fi rom-com series. The series will feature RJ Mantra, Swati Kapoor, and Akhlaque Khan in the lead roles. The series will surely manage to grab audiences’ attention with its storyline. The story of the show revolves around a phone talking to its owner and giving him suggestions to lead a better life. The phone’s voice is given by RJ Mantra. The comedy series is directed by Allyson Patel and Yash Dave. Phone-A-Friend will premiere on 7 April 2020 on the ZEE5 platform.

In the trailer, Varun who is shown as a sex-deprived, self-conscious person who envies people’s updates on social media, suddenly discovers that his phone can talk to him. Gradually, the phone (Leonardo) becomes his best friend and helps him become a better person. Varun tells Leonardo that he has a childhood crush on Jia Jaising. Leonardo helps Varun impress her and the two fall for each other. The series is a humorous tale of romance and friendship between Varun, Jiya, and Leonardo (a cellphone).

The trailer of the new original series is quite impressive and is unlike any other sci-fi shows. Phone-A-Friend adds a unique flavour to traditional sci-fi with a pinch of humour and the sweetness of romance. The makers of the show have managed to hold our attention with their never-before-seen the premise. By the end of the trailer, the viewer is forced to wonder whether the phone is a boon or a bane in Varun and Jiya’s life!

Swati Kapoor and Akhlaque Khan’s performances left us speechless and wanting to see more of them. The humorous dialogues will keep the audiences engaged till the end of the trailer. It seems as though Phone-A-Friend is going to turn out to be a riveting must-watch this month!

Did you like the concept of the new upcoming show? Write to us in the comment section below. Stay tuned for more updates on Phone-A-Friend.

From Akbar-Birbal To Chhota Bheem,ZEE5 KIDS Is The Best And Safest Source Of Entertainment