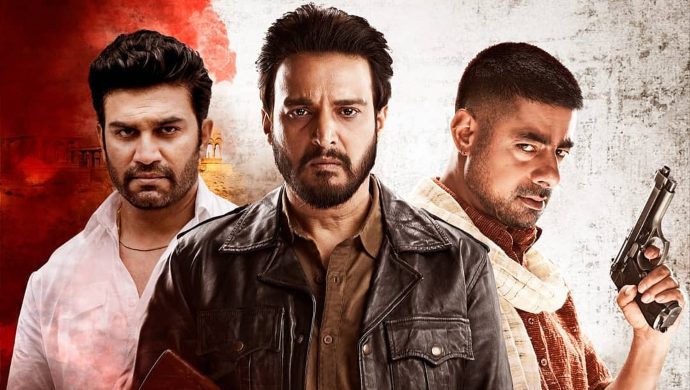 “Things don’t go the way you want them to. Ever! In fact, life is perhaps the most fragile, unstable and unpredictable thing there is” (guess where the dialogue is from). However, those living a cushioned life, fall back on their millions and manage to escape certain hardships, thanks to the great divide. As thousands take to the streets of India to protest against the Citizen Amendment Act and NRC, Rangbaaz Phirse highlights another grave problem hidden in the crowded gullies of the country . The ZEE5 Original is a political thriller with narratives such as vote bank politics, communal tensions, crime and corruption running parallel to each other across the nine episodes released so far. Jimmy Sheirgill plays the central character Amarpal Singh in this hard-hitting violent drama.

The plot begins with Amarpal getting a call from a politician asking for his help to restore communal harmony in the state. “Jab bhi Rajasthan mein aag lagti hai, aap loggo ko Amarpal Singh yaad aata hai,” says a leather jacket-clad Jimmy, oozing swag with his aviator sunglasses on, and through a confident gait. As he tells his followers to maintain normalcy until he returns, the story goes into a flashback of his college, where it all began. A studious and highly ambitious Amarpal finished as the Gold Medalist at Nagaur’s Maharana Pratap College. His first brush with politics was right under those hallowed educational halls . Amarpal tasted power as the President of the student body as disputes between the Rajput and the Jaat community were common in his college. This story is about how asimple man following his dreams, is let down by his own and backed by an opposing Jaat man, Jairam Godara (Sushant Singh)on his wedding day.

Amarpal goes about his life with wife Rukmini (Spruha Joshi) ,when he is requested to contest for the ‘Panchayat’ elections. He loses to his opponent by just two votes. A crushed Amarpal accepts defeat, but a certain Raja Phogat Singh makes it his business to teach Amarpal a lesson, for standing against his candidate. This leads to Amarpal being  arrested and beaten up mercilessly giving him black and blue wounds.

With strong support from Jairam, Amarpal enters the dark, murky underbelly of crime and corruption, to seek revenge. Here on,  begins the story of a man who was #NotBornACriminal,but goes on to become a notorious gangster hailed as the Robin Hood of Rajasthan. The gang war between Raja Phogat and Amarpal Singh is the mainstay of this story, with inputs from pesky politicians who force a straightforward IPS aspirant onto the wrong side of law and order.

Siddharth Mishra, who wrote Rangbaaz, recreates the magic of the Saqib Saleem-headlined web series with Jimmy Sheirgill behind the wheels this time. Retaining every essence of Rajasthani culture  – be it the language, the food, the gang wars, the locales, the dialogues, everything is captivating and weaves together the overall experience into a phenomenal watch.

For someone who hails from Rajasthan, I for one couldn’t tell Rangbaaz Phirse has been shot in Madhya Pradesh extensively, and not in  Rajasthan. Anurag Kashyap has for long taken us into the unvisited sagas of Uttar Pradesh and Bihar, but Mishra has to be thanked for providing us with a deeper insight beyond the royalty and grandeur of Rajasthan. The dialogues are nuanced by the flawless accent of the star cast, to a point where chemistry shared by the actors unfolds beautifully on the screen. Be it Amarpal and Rukmini’s romantic sequences, or Amarpal and Jairam’s bromance, or Amarpal and Raja Phogat’s intense enmity. Mishra has tied all of these scenes with crisp knots, never letting a scene slip out of hand. Director Sachin Pathak’s open-minded approach towards Mishra’s writing reflects very well.

Jimmy has played a goon several times before on the screen. Thus, it comes as no surprise that he owns the character of Amarpal Singh effortlessly and delivers  a striking performance. However, we do have a question to ask – What’s the secret to the swag you carry in each of your characters, Jimmy?

Not just Jimmy but even Sushant has taken to his role of Jairam Godara brilliantly. Perhaps, that is where the years of experience these stalwarts carry with them, sets them apart from the rest of the lot. They sink their teeth deep into every character, merging with it.

Sharad Kelkar‘s versatility is commendable. If you have hated him as a baddie on the screen so far, as Raja Phogat he might just make you love to hate him more. On the bright side, he is expanding his repertoire even in the war genre, with a diversity of background and setting, tapping into the details of every role he sets his heart on. We don’t get to see Gul Panag until the third episode, but as Anupriya Chaudhary she is more than what meets the eye. Rangbaaz Phirse being her second web outing of the year, Gul definitely hits it out of the park making sure she ends 2019 with a bang! Mohammed Zeeshan Ayyub is at his stunning best as police officer Sanjay Singh Meena. Spruha Joshi, star of ZEE Marathi shows like Eka Lagnachi Teesri Goshta and Unch Maaza Zoka, has really upped her game with the web series.

Overall, Rangbaaz Phirse is a powerful watch further enriched by a poignant plot and phenomenal performances. If you have watched the series, share your thoughts on the same using the hashtag #NotBornACriminal in the comments box below.