The REJCTX 2 soundtrack by Ankur Tewari and Ashutosh Phatak perfectly captures teenage angst and the sense of thrill from the upcoming season. 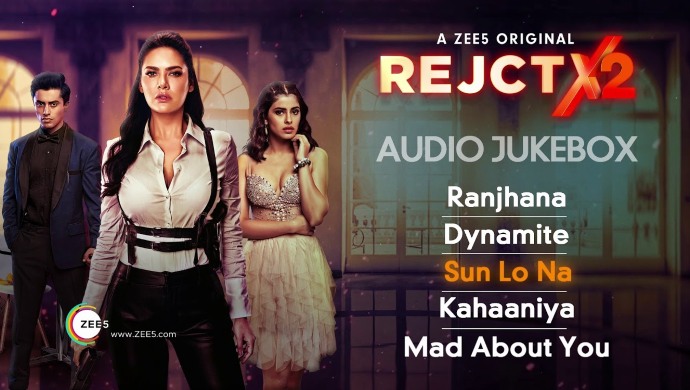 REJCTX is set to return with the second season on 14 May 2020. Before the season releases, the makers have blessed us with the entire music album from the second season. The music for the first season was composed by Sneha Khanwalkar.

In this season, Ankur Tewari and Ashutosh Phatak have together composed these five tracks, that are fresh and full of young energy. Just like REJCTX tells the story of seven students, who form a band, the song was also sung by students from Ashutosh Phatak’s True School of Music. This album blends popular music genres like EDM and hard rock, with beautiful lyrics that we are sure fit well with the story of season 2.

Listen to the entire album here.

Ankur Tewari and Ashutosh Phatak joined RJ Rohini, along with the entire cast, and director, Goldie Behl, to launch the album during a live chat online yesterday. Ankur Tewari mentioned that this was one of the rare shows where he was not given references on what music to make by the director. Goldie Behl mentioned that all the songs from the series take the story forward but they work as individual songs too.

Watch a snippet from this event with RJ Rohini talking to Saadhika Syal from the cast here.

Here’s a lowdown of all the songs you can hear on this playlist.

This is the first song on the playlist, and it is a great opening song. Ranjhana is a unique mix of folk music and lyrics, with electronic music in both English and Hindi lyrics. This romantic song talks about longing between lovers. The lyrics of the song are raw and emotional, which will touch you if you have ever been in love.

Like the name suggests, this song is ‘the bomb’. This song has a heavy drum beat and a great guitar riff. This hard rock-like song will be perfect for your workout playlist, and will get your blood pumping. Watch out for this heart thumping song in the series.

This song sung by Rajat from Ashutosh’s True School Of Music, is the high point of the playlist. This is a romantic song with a heady rock tune that is intense and passionate. While we loved this song, Anisha Victor who plays Kiara in the show said, she liked the acoustic version of the song and now we can’t wait to hear that version too.

‘Batana hai tujhe aye mere yaar, par yahan kisi ko pata na chale’ this line from the song could very well describe the entire story of REJTCX. The story is packed with lies and secrets, that the friends are not ready to confide in each other yet. Kahaaniya is about making memories with your friends and finding out new things about each other.

This song also known as The Maddy Song, is sung by Ruhika, from the True School of Music. Ayush, who plays Maddy in the show, admitted he loved to hear the song all the time. This is one of the rare love songs dedicated to a boy. The song is all about your high school crush, and the crazy feelings you have without even realising what’s happening.

Which song is the one you cannot stop humming? Let us know in the comments below. Watch the trailer for REJCTX 2  featuring Esha Gupta and Sumeet Vyas.

Make Your #FlirtingGame Strong With These Tips From Manmohan Tiwari And Vibhuti Mishra!

Guess The Gibberish Challenge: Try And Guess The Names Of These ZEE5 Original Series