In the trailer, the final scene shows Aarav coming face-to-face with an evil twin who looks exactly like him. Is he Mr X?REJCTX 2 releases 14 May 2020 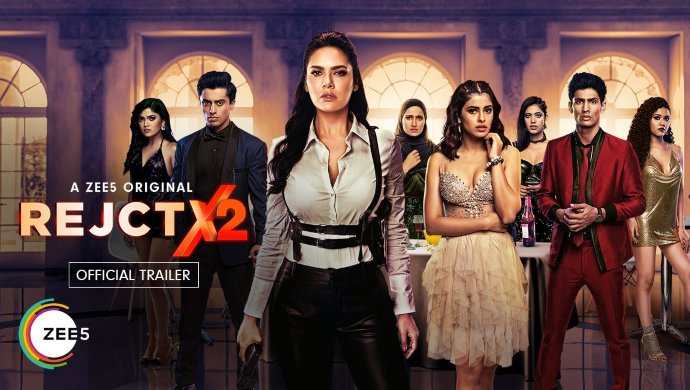 The second season of REJCTX, is set to release on 14 May 2020, less than three days away. The trailer for the second season reveals that the school therapist Anushka Rao (Kubbra Sait) has been killed. In the final scene of the first season, we see Aarav shoot his gun but we never see who he hit with the bullet. In the second season, we see two new characters, Esha Gupta as Officer Rene is all set to get to the bottom of this murder mystery, while Kiara’s (Anisha Victor) cousin Yasha (Tanvi Shinde) is the new student in the school. Both up the glamour quotient in the show.

Watch the trailer for REJCTX here.

In the trailer we get to see a glimpse of the pair we’ve all been waiting to see. Esha Gupta and Sumeet Vyas who are sharing screen space for the first time are seen together investigating the death of Anushka Rao (Kubbra Sait). The trailer also shows the relationship of Kiara and Aarav (Ahmed Masi Wali). Another love story we can’t wait to see if between Sehmat (Saadika Syal) and Misha (Pooja Shetty)

When Officer Rene finds out Aarav was having an affair with Anushka who turns up dead, he becomes her prime suspect. However, Esha is not the only one keeping an eye on the REJCTX, the mysterious Mr. X who never reveals his identity threatens to expose every secret of the REJCTX. They however, don’t even have a clue about the person who is blackmailing them.

While Officer Rene is investigating the murder of Anushka, another murder happens. This is not even the biggest plot twist. In the trailer, the final scene shows Aarav coming face to face with an evil twin who looks exactly like him. Who is this new stranger and is he Mr. X? Watch the series on ZEE5 to find out.

What are you looking forward to most in this season? Let us know in the comments below. Listen to the entire music playlist of REJCTX2 composed by Ankur Tewari and Ashutosh Pathak streaming on ZEE5.