REJCTX is a ZEE5 Original web series revolving around a bunch of Indian students in a foreign elite school. Read our review of the digital drama here. 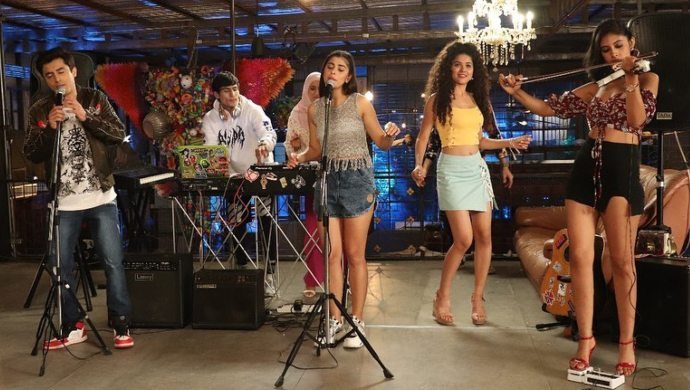 There is no denying that REJCTX, in all probability, is a divisive show. Goldie Behl‘s musical mystery goes beyond the story of teenage angst.  The final episodes of the ZEE5 Original web series premiered on the OTT platform today even though the punches were pulled previously. Examining the reason behind Aarav Sharma’s tragedies, the concluding argument is twice the drama. Behl’s digital drama prepares you mentally for the not so super sparkly world by pursuing the journey of characters that may seem more like people around you. If you are looking for magical music, REJCTX may not be your pick but if you want the painfully gorgeous reality, here you go!

Behl’s attempt to set a story around teenagers in an elite residential school may hit you with major nostalgia until it doesn’t. REJCTX key players include- Aarav Sharma (Ahmed Masi Wali), son of Delhi’s Chief Minister with a sick mother and also the handsome heartthrob you’d want to crush on; Kiara Tiwary (Anisha Victor), she is the girl with the twinkle who is a computer genius who can easily hack into any system, almost reminding us of Deepika Padukone’s ‘chashmish Naina’; Sehmat Ali (Saadhika Syal) is a fencing champion hiding her struggle with gender identity under her hijaab; Parnomitra Ray (Ridhi Khakhar) is the one typical girl at school who thinks she is above all; Maddy (Ayush Khurrana) is a basketball champion who is never without an arm-candy; Harry (Prabhneet Singh) is a wise-nut but a crackpot too; Misha (Pooja Shetty) is obsessed with selfies and her broken English is the school’s laughing stock while Paromitra’s boyfriend Steve is the villain.

REJCTX is a band formed by the above-mentioned students (except Steve) to prove their mettle to the world by winning an underground music battle. The troop is on a winning streak until Aarav goes missing and a dummy body thickens the mystery further. The first episode begins on a keynote and by the time you register, you are back in the day, eight months ago. Sumeet Vyas as Vice-Principal Hussain is shown addressing the fresh batch at Jefferson World School in Singapore. The narratives run parallel thereafter, but you cannot call it an easy transition every time. One moment, we see Kiara hating Aarav, in another, she is practicing her proposal speech. Parnomitra hated the Indian crowd, but eventually, she has all the care in the world to give for Aarav, Kiara and others. The element of intrigue falls loose and weakens the hook that is holding a viewer’s attention: mystery.

One may draw comparisons between REJCTX and other high-school dramas we have watched before. But Behl’s story makes a commendable attempt to explore, understand and range over the concerns of middle and high-school goers. A certain aspect of the show reflects upon the culture of bullying, trolling that very much prevails in their ecosystem. Adolescence comes with its own set of challenges and complexions. REJCTX tries to simply state them, in a very straight-forward manner. However, we must add, the battles each of these characters fight with their self remain undiscovered. We know what happened to them, we don’t know what happened after. They identify themselves as REJCTX, but not a great deal of material is thrown to convince us.

Kubbra Sait as the student counselor Anushka Rao is supreme, stellar and stunning. Whether she is a teacher lusting for one of her students or a woman on a mission, you will love her, and then some more. Sumeet uses his signature style amalgamated sarcasm to its fullest potential. Even though it was a bit odd seeing him as the keeper of discipline, after all the quirks he has offered, the spontaneity remains intact. The screen time could have been further stretched for scenes like Aarav’s kidnapping, Anushka and Aarav’s confrontation, Kiara and Aarav’s romance (or not) could have been better said, it kind of leaves you wanting for more, but not sure if that’s good considering the finale is here.

The subjects that REJCTX deals with or tries to start a dialogue about, hit you hard. Scenes where Sehmat is confused about why she loves Maddy and Misha both or an unconfident Kiara in a fitter body are a delight because they are truly relatable. And then there are others that make you want to secret sob. Besides, digital drama is high on visual appeal. Aishwarya Meshram and Poonam Sharma’s production designs are quite the bait to keep you hooked. Delectably designed, we bet you’d Google Jefferson World School to catch more glimpses! Evan Malik and Rahul Jayakrishnan’s add to the beauty with their brilliant shots of the magnificent school. Dipped in opulence and grandeur, everything about the school, from its sprawling basketball court to the cute lecture rooms is aesthetic beauty.

We now know why Goldie Behl spoke so highly of Sneha Khanwalkar. The music may not be understood by everyone but you’d want to hear once more. If you are a sucker for happy endings, REJCTX isn’t the series you should watch. But if you love a climax that makes you think, Ahmed and Kubbra will blow you away with their devilishly alluring looks and talent, both.

Tell us what you think of REJCTX in the comments section below. You can also listen to the soundtrack on jiosaavn.com

Keep watching this space to know more about REJCTX. In the meantime, tune into ZEE5 to watch a new original film Badnaam Gali starring Patralekhaa and Divyenndhu Sharma.

Rangbaaz To Kaafir: Bollywood Stars Pick Their Favourite ZEE5 Original; Which Is Yours?