On its 5th anniversary celebration, Bhabi Ji Ghar Par Hain's Manmohan Tiwari talks to us about his best memories and his bonding with Saumya and Aasif 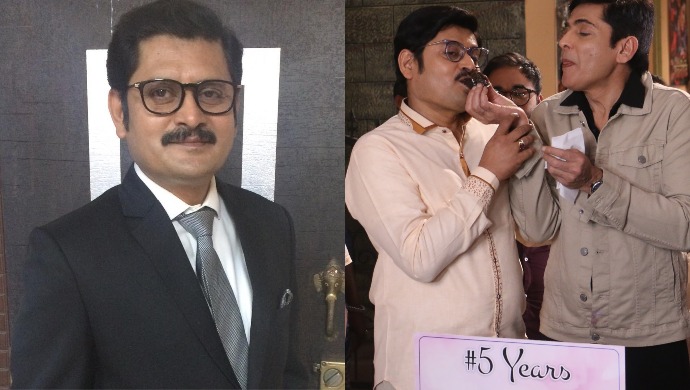 Essaying the hilarious character of Manmohan Tiwari on the famous &TV show Bhabi Ji Ghar Par Hain!, Rohitashv Gour has tickled the audience’s funny bone for five long years and how! His character, Tiwari ji, Angoori’s husband, keeps making ridiculous attempts at wooing his neighbour Vibhuti Mishra’s wife Anita bhabi! On the show, he is called “kachha baniyaan” for his business of undergarments! On the show’s 5th anniversary on 2 March 2020, the cast and crew of the comedy show celebrated &TV’s completion of 5 years as well, on the sets of Sanya Film Studio in Naigaon, Mumbai. Before the cake-cutting, in a candid interview, Rohitashv Gour opened his heart about journeying with the show and his television career:

1. How does your journey feel from Shimla to National School of Drama (NSD) to small roles in Bollywood to 5 years of Bhabi Ji now?

Honestly, when I was doing another show, I had thought that television is not for me and that I should focus my struggle on Bollywood entirely. But after I started doing Bhabi Ji on &TV, when I saw its TRP and popularity, I was surprised! Salman Khan, Ramesh Sippy, Rajkumar Hirani, Saurabh Shukla etc, began to call us saying that they watched and loved the show!

2. What are your top 3 memories or moments on the show?

Firstly, when it launched, I thought it’s just a show of six months. But it kept picking up and the viewership shot high, so it has surprised me a lot! Secondly, though it’s a sad memory, one thing I can never forget is when Shilpa Shinde left the show. Thirdly, we are not getting bored by doing the show every day at all. It’s such a wonderment!

3. When you started your career, did Manmohan Tiwari’s comedy come naturally to you?

Initially yes, getting into Tiwari ji‘s character and understanding his flirting sensibilities was a bit difficult, because he eyes someone’s else wife. But comedy as a genre is something that I’ve been trained into at NSD. And this is just one aspect of mine. Otherwise, I can do any role!

4. As Rohitashv, how similar are you to your character Tiwari ji?

Not at all! I’m nowhere close to Tiwari ji in real life! I just switch on and switch off from my character, because I don’t believe in method acting for my craft. I think that the Indian way of acting is folk and I spontaneously play my character. Neither does Rohitashv influence Tiwari. It’s only the director and the writer’s doing, along with my performance.

5. As characters, who do you like the most, Anita or Angoori?

Both of them are lovely characters, but I have a soft corner for Angoori because she is a typical small-town bahu who doesn’t understand half the things! But she keeps trying to compete with the high-class society which is why she speaks broken English. I find her very sweet!

6. Who do you spend the most time with on set out of the two female leads?

I mostly have scenes with Saumya Tandon because I keep flirting with Anita bhabi, so I try to bond more with her on set! Even when we are reading lines, I try to decipher her process of delivering and emoting. I love improvising scenes with her!

7. We know you and Vibhuti ji don’t get along on the show! How is your bond with Aasif on set?

We have a great bond honestly! I can’t define the relationship I have with Aasif bhai. We’re really good friends and co-stars! And our nature, as people, also matches each other. We even help each other during scenes by adding funny dialogues!

8. You as the actor or Shashank as the director, whose contribution it is more in bringing out Tiwari’s peculiar and weird behaviour?

It’s mostly the writer and the director, coupled with my observations of men in U.P. I’ve seen the way they speak and flirt with a parayi aurat. So when the show was being made, I had kept things in front of the makers. Also, Shashank doesn’t do fast-paced comedy, he takes it slow and that brings out our colours!

9. How do your family and two daughters feel about your quirky character on the show?

My daughters love my character of Tiwari ji more than the last TV show! Even though Bhabi Ji is a daily soap, it connects with the urban youth as well. Because of the songs and the break-dance by a weird character, the entertainment quotient goes up!

10. How is Bhabi Ji Ghar Par Hain contributing to society for five years?

I’ll tell you, this show is not to preach or to give out a social message of “don’t do this or that”! Bhabi Ji is pure entertainment and comedy. It makes people have fun and laugh to their hearts’ content!

11. 8 March 2020 is International Women’s Day. What message would you give out to men out there?

See, even after all the women empowerment movements and laws, I feel that in India, especially in the rural sector, women are still looked down upon. They are told to be inferior and aren’t allowed to stand equal to men, in any field. Even for marriage, men take wives that are mentally or intellectually lower than them. But my question is what’s the harm is standing equally? In fact, their children will have a better upbringing! And when we’re aiming towards the developed countries, it’s important to break that school of thought!

To get more of Rohitash Gour’s performance as Manmohan Tiwari, watch the all the episodes of Bhabi Ji Ghar Par Hain streaming on ZEE5!