In tonight's episode, Narad Muni calls out Polomi for torturing humans with their own devices. She strangles Swati through her magic mirror! 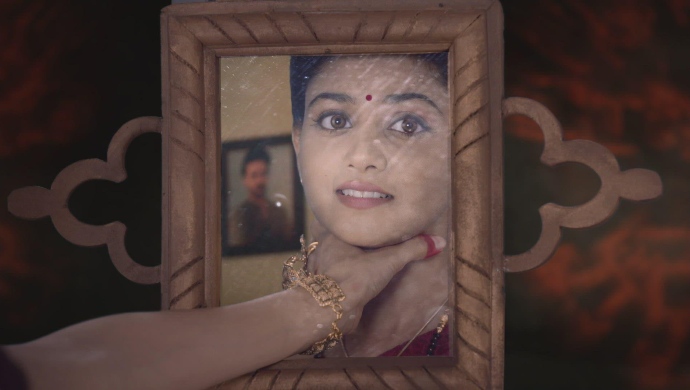 In tonight’s episode of Santoshi Maa Sunayein Vrat Kathayein, while arguing with Polomi Devi, Narad Muni breaks her magical mirror and mocks her for using man-made objects for their own destruction. At Singhasan’s house, he expresses his sorrow of the distance between him and Indresh to Daadi. Indresh overhears him and feeds him a paan. But that doesn’t mean that will leave Swati, because he loves her too.

The next day, Singhasan calls Abhay and Rinki with their laathi, to go out with him, but Indresh takes it from Rinki, as he is the second son. If Indresh wants to go, Singhasan asks him to scold Swati in her room. Indresh pretends to shout at Swati, but later hugs her and then she goes for a pooja. Daadi and Singhasan are happy that Indresh is obeying their orders at least.

Narad Muni goes to Santoshi Maa and tells her about his quarrel with Polomi Devi. Santoshi Maa says that she will send a blessed lotus flower from dev-lok to dharti-lok so that humans stay happy despite the evil forces. Narad Muni appreciates her pure mind, as opposed to Polomi who brings apparatuses from dharti-lok to dev-lok and executes her cruel plans.

Polomi lifts her magical mirror that Narad had broke. She gathers the shattered glass pieces and rejoins them. Then, she decides to see Swati’s face in the mirror and inflict pain on her to take revenge on Santoshi Maa. Polomi strangles Swati’s neck through the mirror at Singhasan’s house, Swati starts choking and falls down. When everyone thinks that she is acting, Indresh comes to help her.

Harleen Sethi On Broken But Beautiful Season 2: Sameera Made Me Emotionally…

In the next episode, Polomi Devi sends a woman disguised as a doctor to remove Swati’s necklace with Santoshi Maa’s pendant. The doctor injects her with a sedative and says that it will help her to rest well. As soon as Swati sleeps, Polomi thinks that once her pendant is gone, it will take no time for her to kill her. Will Swati be safe?