In tonight's episode of Santoshi Maa Sunayein Vrat Kathayein, we see Swati getting married to Indresh in a private ceremony. Details inside. 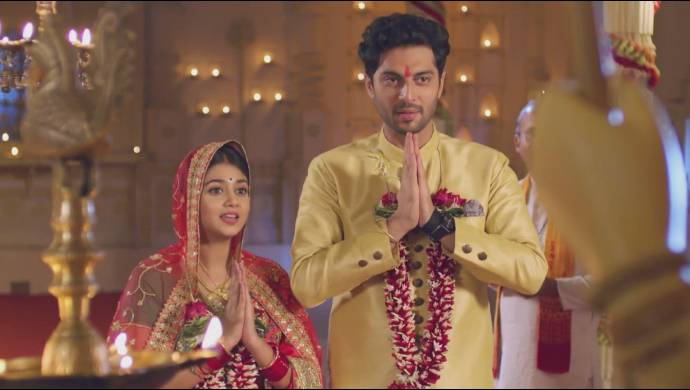 In tonight’s episode of Santoshi Maa Sunayein Vrat Kathayein, we see Indresh and Swati getting married secretly in the temple of Santoshi Maa. They both seek the goddess’s blessings and pray for their relationship to last long. On the other hand, Polomi Devi is glad because Swati’s in-laws are all her followers. Meanwhile, Nidhi’s father is furious because she called off the marriage with Indresh. He orders her to adjust and maintain the relationship in his house. Nidhi’s father is adamant to get her married to Indresh. He and Swati though are busy getting married, in the presence of Swati’s parents.

Later, Nidhi’s father confronts Nidhi and says that he doesn’t want the latter to sacrifice her dreams and get married to Indresh against her own will. She wonders why her father’s behavior has changed suddenly. Meanwhile, Swati tells her parents that she wishes to stay with her in-laws. Indresh feels that it is his duty to fulfill his wife’s dream. Swati bids a tearful farewell to her family.

At Indresh’s house, we see Indresh’s father burning with rage. His anger knows no bounds after discovering that his son has returned home, hand-in-hand with Swati. Indresh’s family is shocked to learn that the two have gotten married. Indresh firmly tells his father that he and Swati will be staying here henceforth. He further tells him that every married woman’s dream is of staying with her in-laws and he considers it his duty to make this dream of Swati’s, come true. Indresh announces that Swati’s Grihapravesh would happen in this house while his family members look at each other with utter disbelief.

In the upcoming episode, Indresh’s father points a gun at Swati and tells her that he will shoot her if she dares to step in. What will happen next? To find out, keep watching Santoshi Maa Sunayein Vrat Kathayein exclusively on ZEE5.