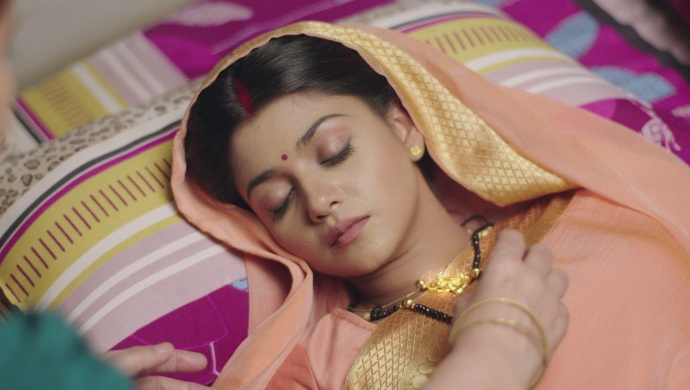 In tonight’s episode of Santoshi Maa Sunayein Vrat Kathayein, when Polomi Devi stops choking Swati through her magic mirror, Indresh calls a doctor to discover the problem. Polomi Devi appears at Singhasan’s house, invisible to everyone else. She manipulates the doctor, who under Polomi’s influence, agrees to harm Swati. The doctor injects Swati with a sedative so that she goes into a deep sleep. Meanwhile, Indresh’s family are having a fight.

Polomi thinks to herself that once Santoshi Maa’s pendant is pulled away from Swati’s neck, the former will kill her. As soon as she orders the doctor, Santoshi Maa’s divine lotus falls from dev-lok to dharti-lok on Swati’s bed. Getting scared, the doctor and Polomi Devi leave from there. Indresh enters the bedroom and sees that Swati has already woken up. He tells her to go to the doctor with him once again.

As they are about to leave, Indresh’s aunt (Chachi Ji) enters their house. She greets Indresh and blesses Swati as she is the new daughter-in-law. When Chachi Ji gives her a plate of shagun, Indresh’s family comes out to see what is happening. They are shocked to see Chachi Ji because they are not on good terms with each other. Singhasan asks Indresh to tell Swati that she cannot accept Chachi Ji’s shagun.

Then, Indresh uncle (Chacha Ji) also enters the house. He scolds Chachi Ji for going to Singhasan’s house and spreading joy. Chacha Ji reveals that Singhasan had thrown him out of his house and since then, they haven’t had good relations. Chacha Ji threatens Chachi Ji to take the shagun back, otherwise, he will beat her up. Swati stands up for Chachi Ji and says that she will call the police if Chacha Ji did so.

Meet The #SahasKiVijay Cast Of State Of Seige: 26/11 Including Arjun Bijlani,…

In the next episode, Singhasan throws the rotis that Swati has made, on the floor, saying that they are uncooked. He instigates Swati to call the police right away! Then, he asks Swati to pick the dirty rotis and eat them. Later, Swati’s parents come to Singhasan’s house with some fruits for Indresh and her. Singhasan insults them and throws the fruits on the ground. Will Swati tell him off?

Mentalhood Review: A Charming Yet Compelling Look At The Many Faces Of Motherhood