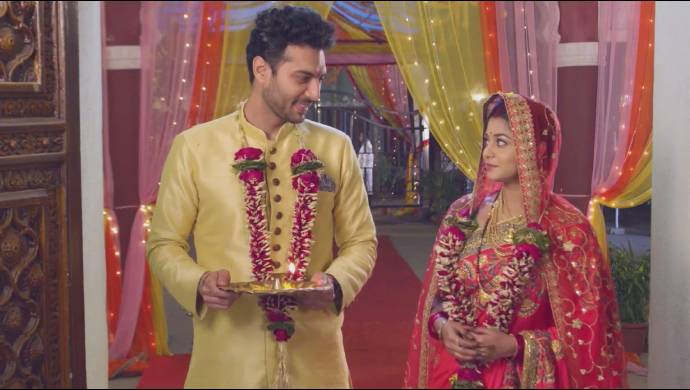 In tonight’s episode of Santoshi Maa Sunayein Vrat Kathayein, we see Indresh’s father pointing a gun at Swati. He tells her that he will shoot her if she dares to step in. Indresh comes in between them and asks his father to shoot him instead. Indresh’s mother steps in to prevent any further mishap. She asks him to give him the gun. Indresh’s father cannot take it anymore and storms off. After a while, Indresh promises that he will make sure that Swati gets a Griha Pravesh. They both then enter the house hand in hand. Meanwhile, Indresh’s mother is reasoning with Indresh’s father and asking him to be patient. She further says that she would be handling Swati’s matter herself. Asfter things are settled, Indresh gives a warm welcome to Swati. He asks his wife to enter the house by performing a traditional Griha Pravesh. Once inside the house, Swati asks Indresh about where she should keep her idol of Santoshi Maa. Indresh tells her to place the idol in their area of worship. Swati hesitates but eventually agrees to do so.

The newlyweds then pray together before the idol of Santoshi Maa and seek her blessings. After a while, Indresh looks worried about something. Swati asks him about what is bothering him. Indresh laughs and says that they need to worry about decorating their room. Swati then receives a call and it turns out to be her mother. The latter asks her if everything is fine back at her in-laws. Swati tells her that she doesn’t need to worry about a thing. Later, Indresh comes in with a bouquet of flowers. He then romantically sprinkles flowers on Swati and decorates the room for the night.

In the upcoming episode, Swati’s in-laws ruin the floral decoration that Indresh had put up, for their first night. What will happen next? To find out, keep watching Santoshi Maa Sunayein Vrat Kathayein exclusively on ZEE5.