In tonight's episode, when Singhasan throws food on the floor and makes Gunti eat it, Swati stands up for her mother-in-law and womenkind. Read more! 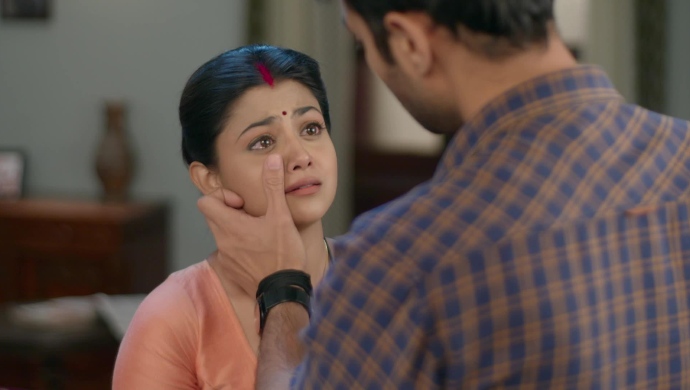 In tonight’s episode of Santoshi Maa Sunayein Vrat Kathayein, Singhasan rebukes Swati for intimidating his younger brother Avadhesh chacha with the threat of calling the police if he harms Chachi ji. Singhasan sternly tells Swati to not take the law and order of his house in her hands. Swati replies that she is a woman, thus she cannot tolerate any disrespect for and violence against women. Singhasan gets very angry!

Suddenly, Singhasan calls his wife Gunti Devi out of her room. Then, he takes the rotis from the lunch that Swati that served him and throws them on the floor. To deliberately show the extent of his misogyny, Singhasan asks Gunti to pick up the dirty rotis from the floor and eat them. He instigates Swati to call the police now! But Swati calls out Indresh’s name to bring him out of his room and see his father’s misbehaviour.

Daadi curses Swati for uttering her husband’s name with her own mouth, as women are not allowed to do that. Swati ignores her and tells Indresh about the torture that Singhasan is putting Gunti through. Gunti feels humiliated by her husband but still asks Indresh to take Swati to their room. There, Swati cries to Indresh about the disrespect that women are facing and says that she was not raised like this by her parents.

Indresh tries to convince the women of the house – Daadi, Gunti, Lovely, and Rinki – to accept Swati as their daughter-in-law and bond with her. At Avadhesh chacha’s house, chacha makes Chachi ji do sit-ups in order to punish her. He grieves about the humiliation with which Singhasan had thrown him out of the house. Later, Swati’s father brings fruits for Singhasan on Chaturthi, but the latter throws them on the ground!

In the next episode, Polomi Devi plans Swati’s destruction yet again because she had escaped from her evil scheme the last time. When Swati is out in the market to buy materials for a pooja, Polomi sees her through her magic mirror. She throws a knife at Swati’s reflection so that it kills her in real life. Will Swati escape alive?