In tonight's episode, Swati passes through a market en route to the temple, where Polomi Devi attacks her with knives through her magic mirror! 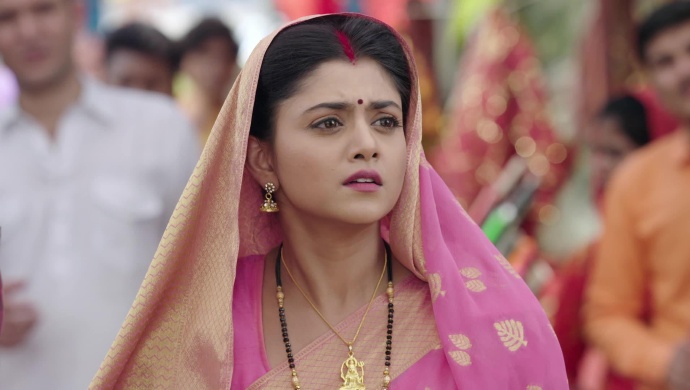 In tonight’s episode of Santoshi Maa Sunayein Vrat Kathayein, Singhasan insults Swati’s father and throws away the bag of fruits he has brought. Swati tells her father to drop her at the temple on his way back because she wants to fast for husband and in-laws’ well-being. Looking at this, Narad Muni praises Swati in front of Santoshi Maa. He is in awe of Swati’s ability to rebuke without insulting!

Santoshi Maa gives credit to Swati’s upbringing by her parents. She promises that Swati’s father will be respected because of his daughter one day, in the same house where he was humiliated today. But Polomi Devi is already planning Swati’s destruction. When Swati is en route to the temple, Polomi sees her through her magic mirror. Then, Polomi possesses a knife seller at the market and takes control of his mind.

To kill Swati, Polomi flings knives at her one after the other, and the knife seller mimics her actions. Swati dodges the attacks but is utterly perplexed. Suddenly, Indresh arrives at the spot and grabs the knife seller by his collar. Swati tells Indresh to let him go as he looks innocent and couldn’t kill anyone. The police also show up and say that they will interrogate the knife seller about why he did such a thing out of the blue.

Santoshi Maa and Narad Muni look at all of this from above. The former says that Swati is strong and Ishwar (God) will always protect her if she keeps fighting for the truth with self-confidence. Later, Daadi wants someone to massage her aching legs and Swati volunteers. While at it, Daadi talks about how people can harm others by black magic. It strikes Swati that the same is happening with her!

Sandeep Unnithan: 26/11 Terrorists Wanted To Attack The Building My Parents…

In the next episode, Swati and Indresh meet Dhara didi who is Santoshi Maa in human form. The latter tells Swati to fast for Bagalamukhi Mata. Singhasan orders everyone to go for a baby shower function, but Indresh refuses. Singhasan raises his hand to slap Indresh. Later, Polomi Devi orders a snake to bite Swati through the magic mirror! Will Swati escape death again?