In tonight's episode of Santoshi Maa Sunayein Vrat Kathayein, we see Swati's family being arrested and put into jail. Find out the details inside. 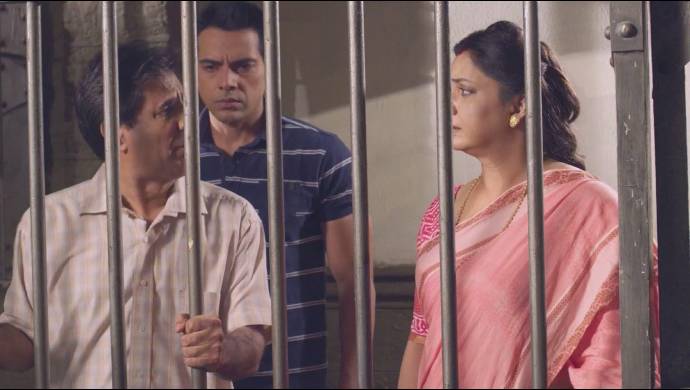 In tonight’s episode of Santoshi Maa Sunayein Vrat Kathayein, we see the police entering Swati’s house to arrest her father. Swati’s brother asks them for a warrant and warns them that he will put their videos on social media if they don’t take tell him the truth behind the arrest. The police sub-inspector threatens to charge him with 40 such cases if they don’t cooperate. Swati’s father tries to intervene by saying that he’ll come with them to the police station as he knows that he has done nothing wrong. The police then arrest Swati’s father and take him to the police station. On the other hand, Swati’s mother asks her son to not reveal anything to Swati as she feels that it will cause her trouble. She tells him that Swati’s in-laws have also accepted her. Meanwhile, Indresh tells Santoshi Maa that the condition of his house is not good at this point in time. To this, the latter replies saying that she will be there every time Indresh needs her. She asks Indresh to go as Swati would be waiting for her.

Later, Lovely plans to throw away the idol of Santoshi  Maa and then kick Swati out of the house. Swati’s in-laws agree to execute the idea. Swati pleads to forgive her and not throw the idol away. She then tries to stop Lovely from doing so and says that she has been a follower of Santoshi Maa since her childhood. Indresh’s mother thinks that she’s faking it and orders Lovely to put the idol away. They then hold Swati while Lovely keeps places idol outside. As Lovely places the idol in the courtyard, a branch falls on her and she injures herself. Lovely shouts at Swati for playing foul and using black magic on her. After a while, Indresh’s mother pushes Swati who falls into Indresh’s arms, as he saves her in the nick of the time. A while later, Indresh’s father announces that he will not let Swati step inside their house again and warns the latter to stay away. On the other hand, the police drags Swati’s brother and her mother to jail, for misbehaving with the police.

In the upcoming episode, we see Santoshi Maa announcing that she’s going to punish Swati for her mistakes. Will Swati be punished severely? To find out, keep watching Santoshi Maa Sunayein Vrat Kathayein, only on ZEE5.