In tonight's episode, Swati and Indresh skip a family function to go to Bagalamukhi Devi's pooja but Singhasan suspects she is using black magic. 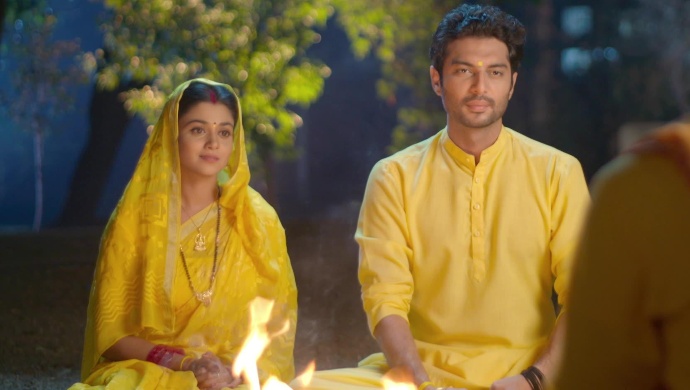 In tonight’s episode of Santoshi Maa Sunayein Vrat Kathayein, Singhasan and his family get ready to go to Sharmaji’s daughter-in-law’s baby shower. Indresh and Swati also dress up to leave for the Bagalamukhi Devi pooja as suggested by Dhara didi (Santoshi Maa’s human form). Singhasan wants to force Indresh to accompany them but Abhay suggests otherwise because the relatives would ask questions about his wife.

When they are about to leave, Daadi goes to look for her wallet which she has forgotten again and everyone is annoyed. While Gunti Devi packs a gift for the mother-to-be, she suggests that the men wait in the vehicle while the women join them in some time. This irritates Singhasan and he decides to check on Indresh and Swati as to which pooja happens so late at night. Narad Muni disguises himself as the pandit and is invisible to others.

Indresh and Swati offer prayers to Bagalamuki Devi as directed by Narad Muni and suddenly Polomi Devi starts getting restless. The temperature in Devraj Indra’s kingdom, Devlok, rises rapidly and Polomi is unable to bear the heat. She sees the glass pieces from her magic mirror shatter and appear in the air. Indra Dev realises that the mirror does not belong in Devlok and confronts Polomi about it.

When Indresh and Swati are back home, Singhasan pulls Indresh to the side and tells him that he spied on them but couldn’t see any pandit. He expresses his suspicion about Swati performing black magic on Indresh. Indresh brushes off the argument. Later, Narad Muni goes to Polomi Devi where Bagalamukhi Devi also appears. Narad Muni thanks Bagalamukhi, who announces that she doesn’t help corrupt goddesses like Polomi.

Naghma Rizwan Of #ItHappenedInCalcutta: I Couldn’t Talk For Hours After…

In the next episode, a relative, Sunita Devi enters Singhasan’s house and labels Swati as characterless for eloping and marrying Indresh. Gunti Devi listens to this and slaps Sunita hard! Singhasan arrives and says if he ever accepts Swati as his lawful daughter-in-law, his face should be painted black! Will Indresh defend Swati?

#StateOfSiege2611: 7 BIG Mistakes That Led To A Prolonged Terror Attack In Mumbai In 2008