In tonight's episode, Singhasan is worried because Swati is slowly getting accepted at Indresh's house, starting with Daadi and Gunti. 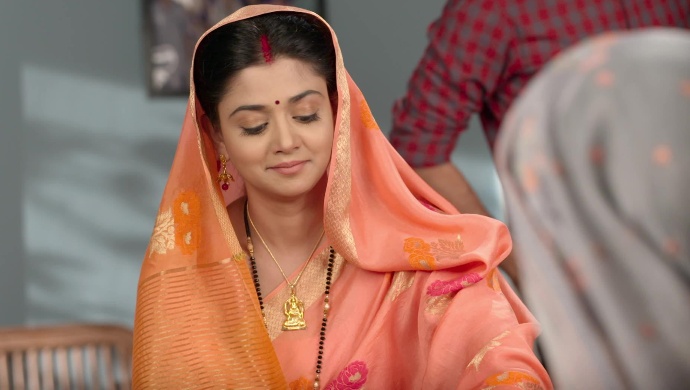 In tonight’s episode of Santoshi Maa Sunayein Vrat Kathayein, Indresh and Swati come back home after worshipping Bagalamukhi Devi. Swati questions him what Singhasan was saying about the pooja and black magic. When Indresh reveals the matter, Swati tries to convince him that Singhasan is upset but doesn’t hate him. Both of them banter about Swati taking her father-in-law’s side over her loving husband!

Lovely makes bad tea for everyone and Rinki forces it down Lovely’s throat to teach her a lesson. Singhasan humiliates Lovely by diverting the topic to her childlessness. Her husband, Abhay, also agrees with Singhasan and hurts her even more. Lovely goes to her room and cries because it is Abhay’s fault that they cannot conceive and not hers. Gunti Devi calls her outside to see how Swati is trying to bond with Daadi and the others.

When Daadi’s legs are aching, she cribs that nobody cares for an old woman. Swati steps forward and Indresh backs her up by suggesting that she will massage Daadi’s feet. The latter can also pay Swati if she doesn’t want any favours from the unlawful daughter-in-law. Daadi agrees to it and they go to her room. Looking at Swati’s kindness, Daadi praises Indresh that he has found a virtuous wife in Swati Singh!

Suddenly, Gunti’s friend Sunita arrives at their door and insults Swati for trapping a humble man like Indresh into marriage. Gunti Devi is furious to hear this and gives Sunita a tight slap! Gunti defends Swati by addressing her as their daughter-in-law. Singhasan is stunned to hear this. He thinks that he must take things back under control, otherwise, his family will switch to Swati and Indresh’s side.

Sandhya Mridul On Her Character in #Mentalhood: Ajo Is A Perfectionist And A…

#StateOfSiege2611: 7 BIG Mistakes That Led To A Prolonged Terror Attack In…

In the next episode, Parvati is upset with Mahadev. To make up to her, Mahadev takes a half-male and half-female form (ardhanarishwar). Santoshi Maa, with other gods and goddesses, showers flowers on them. In a sugarcane farm, Indresh and Swati play with and hug each other. Are things finally falling in place?