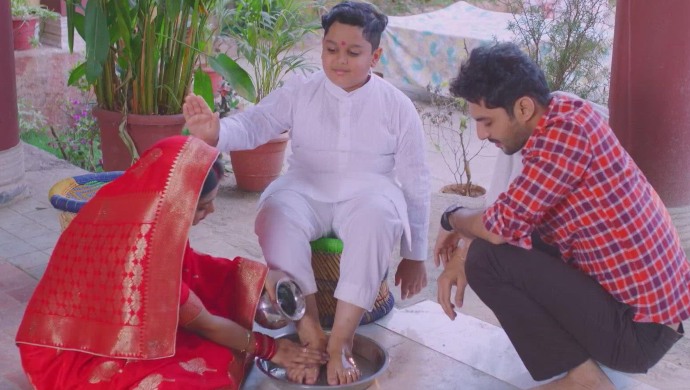 In tonight’s episode of Santoshi Maa Sunayein Vrat Kathayein, we see that Swati serves prasad to the children. One of them asks Swati for something sweet. She says that she doesn’t have any chocolates, but she can get laddoos for everyone. When she goes to the kitchen, Lovely and Indresh’s sister share a tamarind toffee with each other. Swati realises that the children had also eaten the same toffee, which is sour in taste. She immediately runs and stops the children from eating the prasad because Santoshi Maa gets upset if anything sour is eaten before her prasad. Swati cries when she learns that Lovely and Indresh’s sister gave them the sour toffee despite knowing this fact.

Suddenly, Singhasan Singh makes an appearance and shouts at Swati for cooking in his kitchen and feeding the children for free. Swati asks Indresh to get a different group of children, that have not eaten anything sour. Narad Muni is very happy knowing that the unfortunate incident did not take place. While Santoshi Maa and Polomi Devi have a conversation, the latter calls her ‘Santoshi,’ and this makes Narad Muni furious. Polomi Devi poses a challenge in front of Indresh but Santoshi Maa orders Narad Muni to go and help the latter. On the other hand, the daroga threatens Swati’s parents and asks them to not forget Singhasan’s words. Indresh finds a boy who hasn’t had anything sour and can eat the prasad on behalf of the eight children. Swati feeds him and fulfils her fast. At this, Mahadev and Parvati are pleased with Indresh.

It Happened In Calcutta Trailer: A War And An Epidemic Tests…

In the next episode, we see Singhasan Singh and Abhay planing to kill Swati. Lovely fills a bucket of water from the well and leaves a live wire in the water, so that Swati can touch it and get electrocuted. She also assumes that Indresh will be puzzled about this strange accident. To know more, keep watching all the episodes of Santoshi Maa Sunayein Vrat Kathayein, exclusively on ZEE5!