In tonight's episode, to illustrate why a husband and wife are called each other's better halves, Mahadev takes the Ardhanarishwar form with Parvati! 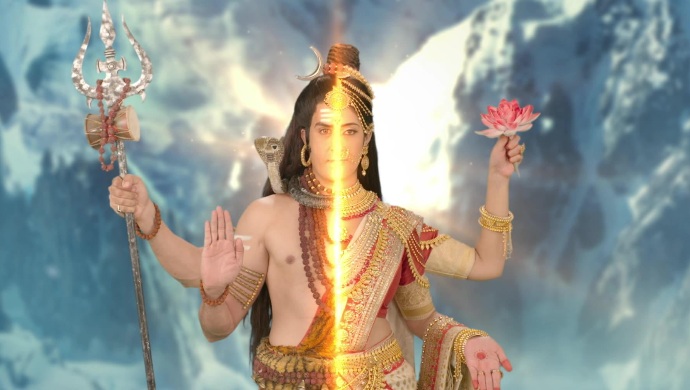 In tonight’s episode of Santoshi Maa Sunayein Vrat Kathayein, after Daadi and Gunti Devi start warming up to Swati, she promises Indresh that she will work hard and win everyone’s hearts in Singhasan’s house, slowly but surely. While eating supper, Indresh assures Swati that he will always have her back. With words of wisdom, Swati says that if we want a full-grown tree, it needs to be watered every day as it can’t bear fruit in a day!

Polomi Devi goes to the rishi of asuras to fight for their community. She says that the rishi gives them false hope but doesn’t take any action. The rishi gets furious and declares the essence of asuras will never be wiped out from the earth. Humans will possess evil thoughts and traits even after the asuras are long gone! On the other hand, Mahadev and Parvati are also having an argument because the latter is upset!

To make up to his wife, Mahadev holds Parvati’s hand and merges himself with her. By doing that, he transforms into Ardhanarishwar (a half-male and half-female form). Parvati explains to her granddaughter Santoshi Maa that a husband and wife are known as each other’s better halves for this very reason! A similar example is seen in Indresh and Swati, who are in the middle of a sugarcane-eating competition on a farm!

The couple goes to Sunita Devi because Swati wants to apologise on behalf of her in-laws’ ill-treatment. They sit down to share some quality time. Swati tricks Indresh into telling stories from his childhood and eats up the sugarcane while he is speaking. Indresh loses but says that his joy lies in Swati’s victory because they are each other’s better halves. Swati hugs Indresh and says also lost with him even though she won!

In the next episode, Swati serves food to Singhasan, who refuses to take it from her. He hates her and asks to cut all the drama. Swati replies that she genuinely wants to win everyone’s love. But Singhasan declares that he won’t let that happen because he is Swati’s biggest and worst enemy alive! Will Swati turn his hatred into love?