In tonight's episode, Swati she accepts Singhasan challenge to win everyone's heart, and Polomi Devi gives birth to a rakshas who attacks Indra! 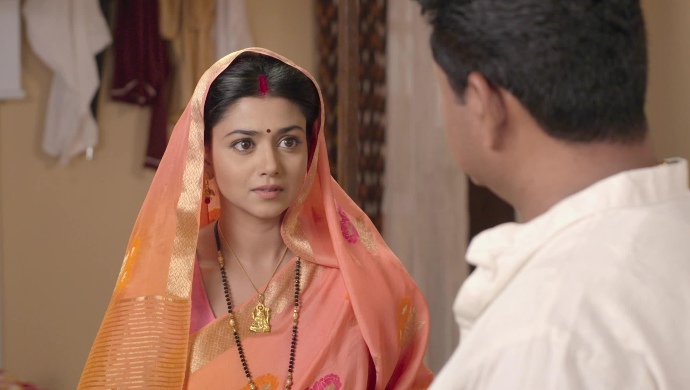 In tonight’s episode of Santoshi Maa Sunayein Vrat Kathayein, Gunti Devi cries because everyone insults her for defending Swati. She cribs about Daadi being a sneak and causing her trouble. Gunti wishes that her mother-in-law would die soon and Lovely adds fuel to it. It’s a tradition in their house that everyone else can eat only after Singhasan finishes. And women always eat after men. But Swati is a rulebreaker!

When Singhasan is served lunch by Gunti, Swati also brings a plate for Daadi. Singhasan gets upset and walks into his room, refusing to eat. Indresh takes Daadi inside where she can have lunch peacefully. Gunti gets scared that she will have to bear the brunt of Singhasan’s anger later. But Swati says that she will take one for the team and make sure than Singhasan eats. The latter challenges Swati with a condition before eating!

Swati accepts that if she is successful in winning each family member’s heart, the family will be on her side. But if she loses, she will get out of the house without Indresh. Singhasan then eats his meal served by Swati and everyone is shocked at the sight. She then brings food for Gunti Devi, who realizes her kindness. Narad Muni praises Swati in Santoshi Maa’s presence but fears that Polomi Devi might be up to some evil!

Polomi Devi is absent from devlok, which worries Naraad Muni. Santoshi Maa calms Narad Muni and says that Polomi is free and independent. In patalok, Polomi Devi performs a yagya with the rishi of asuras in order to ruin Santoshi Maa and Swati’s lives. She allows glass pieces to be thrown on herself so that she bleeds and a rakshas is born out of her blood. Polomi Devi instructs the rakshas to follow her orders blindly!

In the next episode, Gunti Devi dresses up on Singhasan instructions because he wants to taunt Indresh that beautiful wives can be acquired through arranged marriages as opposed to love! Devraj Indra is attacked by the new rakshas because Polomi herself ordered him to attack her husband! Will Indra and Indresh defend themselves?