In tonight's episode, Indresh and Swati leave the house to make a home of their own. Santoshi Maa is happy to see them take that step. 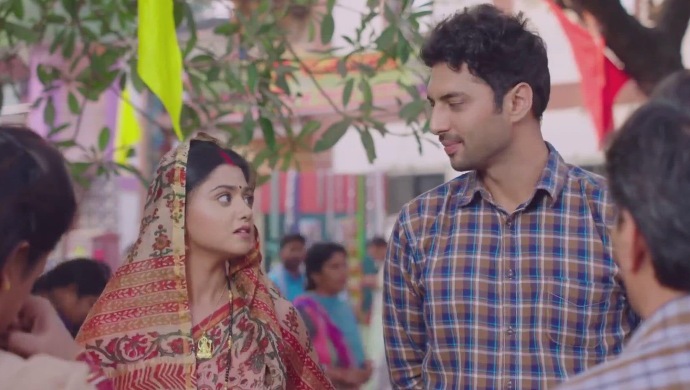 In tonight’s episode of Santoshi Maa Sunayein Vrat Kathayein, Indresh and Swati pack their bags and leave the house. In swarg-lok, Narad Muni sarcastically tells Polomi Devi that he feels sad for her and that her patience is worth appreciation. Swati’s parents have a conversation with each other in which Swati’s father tells Archana to stay strong. Just then, Singhasan calls him up and mocks him. Indresh and Swati go to a beach and the former expresses that he is feeling like a hero today! Swati also says that when a girl has the love of her life, she feels like a heroine every day. They share a cute romantic moment here. Indresh says that their love will endure all hardships.

Then, Singhasan scolds his wife, Gunti Devi for crying. He insults him by saying if she was a better mother-in-law, Swati would be under their control. While Indresh and Swati share a cup of tea, Swati’s parents come to invite them to their home. Indresh offers them tea but refuses to go to their house, promising them that one day he will call them to his and Swati’s own house. From above, Santoshi Maa and Narad Muni are happy to see them taking their steps towards a new beginning. While they are on their way, some goons, on bikes and with daggers, surround Indresha and Swati. They get scared and hug each other.

Exclusive! Dia Mirza Calls Her Win At The Dadasaheb Phalke Awards A Collective…

In the upcoming episode, Indresh fights the goons who surround him and Swati, sent by Singhasan and Abhay. Two goons grab Swati’s hands tightly. She gets extremely scared. Indresh swears on Mahadev that if anything happens to Swati, he will bash them up. One goon aims a punch at Swati. Will he land the punch? Find out by watching all the episodes of Santoshi Maa Sunayein Vrat Kathayein only on ZEE5!

Watch The Cast Of Shukranu Try To Guess Different Sex Positions. How Many Can You Guess?