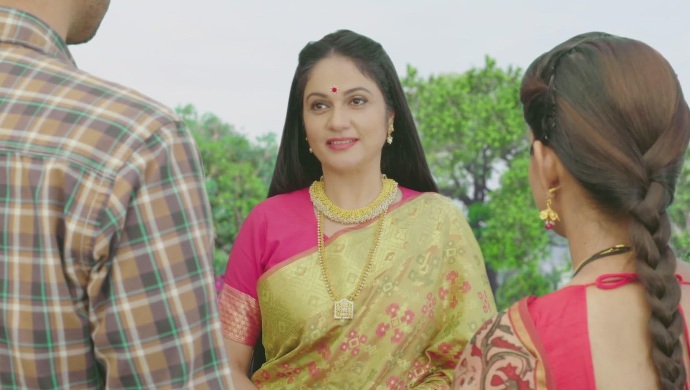 In tonight’s episode of Santoshi Maa Sunayein Vrat Kathayein, Singhasan Singh and Abhay’s goons surround Indresh and Swati on bikes. Taking them one by one, Indresh fights them by kicking and punching them hard. Swati is terribly scared watching this. Overseeing from above, Santoshi Maa transforms into a human and lands on earth. Her purpose is to protect her devotees and she asks the goons to leave Indresh when they grab his arm. When asked by the goons whether she loves her life, Santoshi Maa replies saying  that she loves Swati. Santoshi Maa goes with them to search for shelter.

Then, Indresh and Swati starting making a shack for themselves. Mahadev, Parvati and Narad Muni wish to land on dharti-lok and help them. They disguise as labourers and ask for work but Indresh refuses to accept their service as he has no money. Mahadev says that he can pay him in kind, not in cash. Indresh feeds Mahadev after his work is done, but he runs out of money. Swati offers her mangal-sutra but Parvati cannot see her in such a situation. She asks Mahadev to get up and they leave. Santoshi Maa sees all of this and blesses Swati’s kind heart. All the gods go back to swarg-lok again. Later, Narad Muni is worried about what must Polomi Devi be up to now.

In the next episode, Swati prays to Santoshi Maa, requesting her to enter their new house. After Swati’s griha-pravesh, Indresh goes to Singhasan’s house to give them sweets. But Abhay and other family members insult him by saying that he is not a man anymore because he is living in a house made by his wife. Singhasan calls Rinki, Indresh’s sister and tells him that she is the new son of his house now! How will Indresh deal with this humiliation? To know more, keep watching all the episodes of Santoshi Maa Sunayein Vrat Kathayein streaming on ZEE5!