In tonight's episode, even when they run out of money, Swati and Indresh's love grows stronger. Santoshi Maa dwells in their new house. Read more! 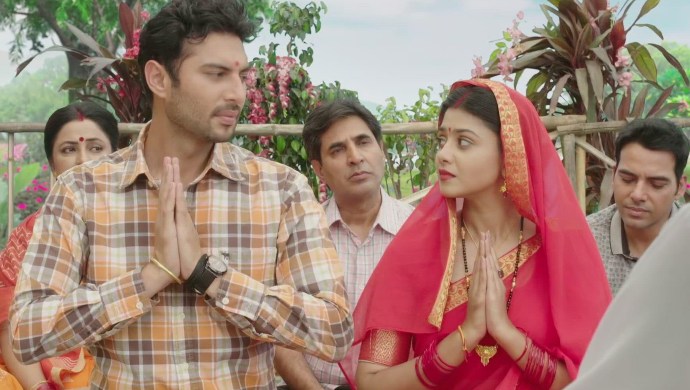 In tonight’s episode of Santoshi Maa Sunayein Vrat Kathayein, Polomi Devi goes to his husband Devraj Inder because she is jealous of Santoshi Maa and keeps comparing herself with the goddess. Meanwhile, Swati’s mother wants to send food to Swati through her brother, but her father says that they should let them be so that they grow stronger. At Singhasan’s house, he gets angry because his wife cries for her son Indresh. Singhasan asks Abhay to break Indresh’s hands and legs and bring him back. Swati and Indresh light up a small fire at their new house to keep warm. They have no money left, but their love for each other doesn’t fade. They share an innocent romantic moment and then fall asleep.

The next morning, Indresh sets out to find work and earn money. When people try to lend him money in his father Singhasan’s name, he refuses to take it because Swati had said that she wants to begin their new journey with sincerity. Swati starts cleaning her house and finds two gold coins in the dust, which reminds her of Santoshi Maa’s blessings. Later, they hold a griha-pravesh pooja, which is graced by Swati’s family. Swati prays to Santoshi Maa and she appears to enter their new house and dwell in it. Later, a tough Singhasan Singh is seen missing his son Indresh.

ZEE5 Presents The Second Season Of Another Successful Franchise, Abhay Is Back…

In the next episode, Mahadev asks Polomi Devi to hold her husband’s hand and gives her a boon. He says that Santoshi Maa will not able to ruin Polomi Devi’s plans of influencing Swati’s life. Later, Indresh takes sweets (prasad) to his mother’s house. But, she refuses to eat them because her husband Singhasan sees Swati and Indresh’s marriage as toxic. As prasad is not supposed to be returned, Indresh asks his mother to throw it herself and she starts crying. Will her love for Indresh overcome Singhasan’s hatred?

It Happened In Calcutta: EXCLUSIVE Behind-The-Scenes Stills From The ZEE5 Original Series