In tonight's episode, seeing Swati and Indresh's relationship, Polomi Devi is jealous of Santoshi Maa. She fasts and asks Mahadev for an unusual boon. 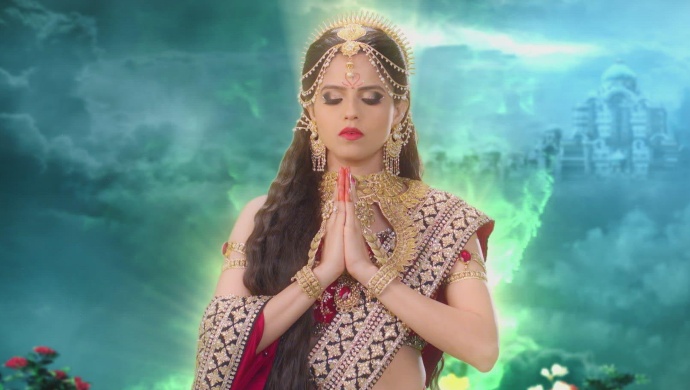 In tonight’s episode of Santoshi Maa Sunayein Vrat Kathayein, Singhasan misses his son but doesn’t show the same, because of Swati. He doesn’t wish to go to the temple for jal-arpan but his wife Gunti Devi convinces him. In turn, he taunts her and orders her to bring his son Indresh back. If she fails to do the same, he will deem her unworthy of being a mother! Just then, Indresh enters the house with a box of sweets. Singhasan announces thatIndresh is no longer his son and calls Rinki instead, to hold the laathi. When he leaves, Indresh meets his mother and gives her the prasad of Swati’s griha-pravesh.

Indresh’s mother cries because she still loves her son, but refuses to eat the prasad because Singhasan would get furious. Indresh is hurt and asks his mother to throw the prasad away because it’s not meant to be returned. After leaving, he meets Singhasan and Chacha who insult him. But he keeps his self-respect in check and walks away. Later, Polomi Devi, along with his husband Devraj Inder, goes to Mahadev. He gives her a boon that Santoshi Maa will no longer be able to interfere in her plans or obstruct her. When Parvati and Narad Muni learn about this, they confront Mahadev. He answers saying that Polomi Devi has kept a fast (vrat) for him, so he had no choice but to bless her!

Here’s A New #Mentalhood Dare For All You Fabulous Moms…

Kaali Season 2: A Recap Of Paoli Dam’s Compelling Story So Far From Season…

In the next episode, after receiving an undeserving boon, Polomi Devi wants to test it herself. As the blessing was pronounced by Mahadev, Polomi holds her husband Devraj Inder’s hand and blows in the air. Through a magical window, she sees Swati doing household chores. Wickedly, she sets Swati’s saree on fire! Swati is extremely scared and starts shouting for help. Helpless by the boon, Santoshi Maa just looks at her but is unable to act. Who will save Swati from the fire?

Here's A New #Mentalhood Dare For All You Fabulous Moms #MotherhoodChallenged