In tonight's episode, Indresh rescues Swati's brother Anuj and hands his brother Abhay to the police. Singhasan and Polomi plan to bring them back. 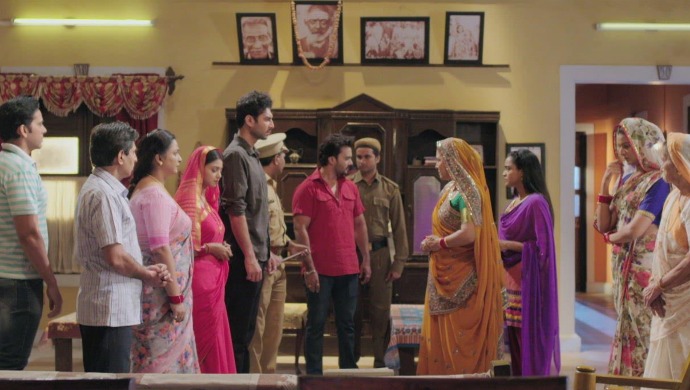 In tonight’s episode of Santoshi Maa Sunayein Vrat Kathayein, when Narad Muni suspects Polomi Devi to be a fraud, the disguised daasi answers that though she is an asura kanya, she has married into devlok and is trying to adopt her husband Indra’s culture. Parvati stops Narad Muni from questioning her further when Santoshi Maa appears, pleased by the yagya. She thanks Mahadev, Parvati, Narad, Indra, and the fake Polomi for honouring her, but the real Polomi looks at this drama from above with evil eyes.

Indresh goes to Singhasan’s house, along with Swati, her family, Abhay and the police. He confronts Singhasan in front of everyone. Indresh announces that he loves Swati and will do anything to protect her family. When questioned about putting Abhay in jail, Indresh answers that he has only rescued Anuj, and that the rest is up to the police. Singhasan says that it’s fine if Abhay goes to jail, which infuriates his family. Gunti Devi asks Indresh, Swati, and her family to get out of her house!

Singhasan thinks to himself that he will now take this enmity a notch higher. When Swati’s family is on their way, Anuj thanks Indresh for saving his life. He also confesses that initially, he did not like him as a partner for Swati, but now he does. Indresh and Swati share a cute, romantic moment. In Indra’s court, the disguised daasi regains her true form and tells Polomi Devi that she will not help her anymore.

The daasi says that she will now worship Santoshi Maa for life. Polomi Devi furiously banishes her from their kingdom. Later, Polomi Devi enters as a spirit into Gunti Devi, who announces that she will bring Indresh and Swati home, accepting her as their daughter-in-law. Her children try to dissuade her, but Singhasan thinks that it’s a good plan!

In the next episode, Gunti Devi arrives at Indresh’s house and asks him to go with her. When he refuses, Gunti threatens to commit suicide. She stands at the edge of a well to jump, but Swati runs to stop her. Gunti makes her promise that she will bring Indresh back, else she will go out of his life forever. Will Swati go back to Singhasan’s house?