In tonight's episode, Gunti tries to commit suicide when Indresh refuses to go to their house with her. Swati swears that she will bring Indresh back! 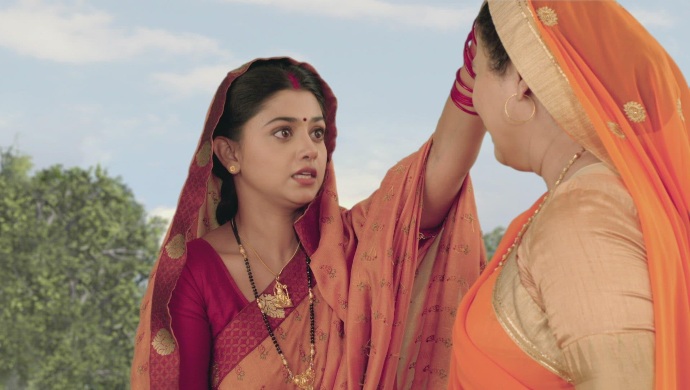 In tonight’s episode of Santoshi Maa Sunayein Vrat Kathayein, Swati and Indresh go home after rescuing her brother. While sharing a romantic moment with each other, Indresh expresses that he was once a dancer, but Swati doesn’t believe him. To prove himself, Indresh dances joyfully in front of her. When she runs inside to cook for the night, Indresh grabs her hand and performs on a romantic dance with her as well!

Swati is reminiscing those joyful moments when Indresh’s mother Gunti enters their house and humiliates Swati for turning her son against his own family. Swati tries to defend herself and reveal the truth. Indresh comes in and tells Gunti to leave them. But Gunti is adamant that Indresh goes to their home with her. When he refuses, Gunti threatens him that she will commit suicide!

Later, Santoshi Maa tells Narad Muni that Indresh’s love for Swati is pure as he chose dance as a medium to express it. Narad agrees by saying that Mahadev had also taken Natraj’s avatar to profess dance as a message of love. But Gunti leaves off Swati’s house while screaming that she is going to kill herself.

To stop her from doing so, Swati runs behind her. When Gunti reaches the edge of a well to jump in it, she compels Swati to promise her that Indresh will come back to their house. In tears, Swati places her hand on Gunti’s head and swears that she will bring Indresh back. And if she fails to do so, she will go away from his life forever.

Monty Singh: Who Was This Mastermind Behind The Notorious Jailbreak In…

Shukranu Music Review: Melodious Tracks With Its Vintage Vibes Will Take You…

In the next episode, Singhasan insults Gunti that she couldn’t bring back her son who was born from her own womb. Gunti starts sobbing loudly. At night, Lovely and Rinki sneak into Swati’s house and try to kill her by suffocating her with a pillow while she is fast asleep. But it seems like they’re choking the wrong person. Is Swati safe?