Santoshi Maa 9 March 2020 Written Update: Indresh Is Back In Singhasan’s House For Swati

In tonight's episode, Indresh has a nightmare that convinces him to return to Singhasan's house for Swati. Narad Muni and Polomi Devi have an argument 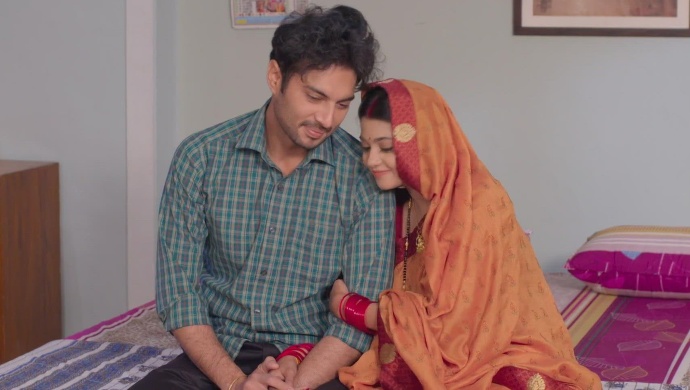 In tonight’s episode of Santoshi Maa Sunayein Vrat Kathayein, Indresh phones Gunti Devi at Singhasan’s house. But she does not answer as she wants Indresh to come back. Polomi, who is hiding behind a wall, takes the form of Gunti and answers Indresh’s call to misguide him. Swati is at Singhasan’s house and her parents are against her decision of going back alone. They try to call her. She is asleep when Indresh suddenly barges into Singhasan’s house.

Then, Narad Muni confronts Polomi Devi as to why she deceived Indresh by using a man-made machine despite being a goddess. She scolds Narad for interrupting his plans. Narad mocks her for her evil doings and she disappears along with her chariot. Meanwhile, Indresh gets scared because he has a nightmare of Lovely and Rinki trying to kill Swati. He goes to Swati, hugs her tightly, and takes her away by her hand.

When Swati and Indresh are having a conversation, Singhasan mocks Indresh by calling him a “crazy lover”. Lovely asks Abhay to force Indresh to stay, so that they can execute their plan against Swati. All of his family insult him for caring for Swati, and hence, he is convinced to come back to their house for Swati’s sake. Since Singhasan is silent, Indresh confronts him, but Daadi says that there is no need to ask him since she is the eldest in the family.

To lift Indresh’s ruined mood, Swati tells Indresh that she wants to see his Ganpati dance. When Indresh refuses, Swati snatches his phone and plays a song. Both of them dance with each other and get over their struggles with each others’ support. Indresh promises Swati that he respects her decision of living with her in-laws despite the ill-treatment. Later, Narad Muni and Polomi Devi fight with each other.

Operation Parindey Writer Tejas Dhanraj: It Took A Lot To Research On…

In the next episode, Polomi Devi creates a magical mirror in which she can see Swati’s reflection. Polomi decides that from now onwards she will trouble Swati through the mirror and the effects will be seen on her in dharti-lok. Polomi strangles Swati’s neck in the mirror and at Singhasan’s house, Swati starts choking and falls down. Everybody thinks she is acting. Will Indresh save Swati?

Mentalhood’s Karisma Kapoor Has Holi Plans With The Whole Kapoor Khandaan! Check It Out!